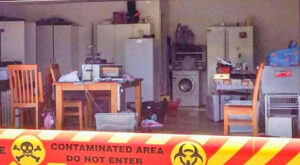 In 2015, Tenterfield business owner Richard Merola was on a downward spiral. Threatened by the prospect of losing everything, he purchased a couple of properties on the Queensland border, but they too quickly went sour. Desperate to make money, he moved his family back to Wollongong and hooked up with a guy who was cooking meth.

“I got him to show me how to do it, and because I already had the chemical education, he only had to show me once, and that was it. I started producing better meth than him, and he’d been doing it his whole life,” Merola says.

Over the next year, Merola spent his nights cooking meth in an undercover shed filled with ammonia, a scent that he compares to the smell of cat urine or rotten eggs. He would then travel a three-hour return trip to the Gold Coast daily, selling what he’d made. While waiting for the cook to finish, he would smoke the meth to stay awake.

“I thought it was unreal. I thought it was the best stuff I’d had in my whole life. But I didn’t last long. I got pinched,” Merola says sitting in the small backyard of his home. “It’s a dirty game.”

Sipping on a glass of wine, he recounts his life story. Growing up, he’d had a life of privilege a stone’s throw from the waterfront in Wollongong, full of homemade Italian treats and dishes. But it wasn’t to last. It was a life that later became filled with crime and deception, which he traces back to its beginnings in school. Having not achieved much of an education, Richard lied his way through to year twelve, and luck has been on his side since, that is, until his arrest.

“I didn’t pass a single subject but went to a private school. I was a slow learner and a troublemaker. I just held on by the skin of my teeth. I knew that I was wasting years, but at the same time, I was probably too scared to jump into the real world,” he says.

When school finished, still living at home, Merola’s trouble with the law began, despite having a warm bed and never wanting for anything. Merola says he was sucked in by the thrill of the chase and the phenomenal amount of money that manufacturing large commercial quantities of drugs afforded him.

The first time he faced a magistrate at 18, he was dealt with leniently for receiving stolen goods. Merola was young, a first-time offender, and from a good catholic family. They let him off on a Section 10, where there would be no criminal record beyond the duration of his rehabilitation. Driven by money and the realisation that he could get away with it, he rented a warehouse and imported chemicals from China to manufacture large amounts of synthetic marijuana. Over the next few years, by his own admissions he was out of control. He had come to love a lifestyle of overseas trips, casinos, limousines, multi-million-dollar houses, and buying his wife $30,000 Louis Vuitton bags.

One morning in the summer of 2014, after a newspaper revealed the multiple arrests of his associates from the night before, he decided to do a deal. Running straight to his criminal lawyer, who then contacted the detectives leading the task force. He would become a Crown witness and provide statements on the people already arrested for the crime. In exchange, he received a letter from the NSW police commissioner stating that there would be no conviction for any offence he had admitted to committing.

Merola had received a get-out-of-jail-free card, but in 2016, his luck ran out.

“I stopped doing what I was doing because I had spilled my guts out, they knew everything, and I couldn’t do it anymore. I didn’t want to get back into it because I was too scared, but I was more scared of losing everything,” he says. “I had to start making some money, and I saw the guy cooking meth, and I could see all this money he was making, and I thought, get in there, get yourself out of trouble.”

Yet, a year after he started the meth game, Merola was in more trouble than ever. Pulling onto his street to collect cocaine and clothes for a New Year’s Eve party in Kyogle, he noticed the road was closed and swarming with red and blue lights.

Heart racing, he did the bolt and pulled a U-turn, but was soon forced from his vehicle at gunpoint. He knew what he had done. He knew why they were there, yet all he could think was, ‘why couldn’t they have just waited a couple of days?’

Merola missed the New Year’s Eve party, instead spent the night locked in a cell in Tamworth Correctional Centre. His company were cockroaches and the word c****, smeared in faeces on the wall.

After his conviction, Richard spent time in two prisons over the next two years. He found prison dangerous. He recalls the time he watched another man being bashed to death with a mallet.

Whilst in prison, his life also came crashing down. The government forfeited all of his assets, and he divorced, ending up broke, and living back where it all began, at his parent’s house.

“Funnily enough, he’s always been the perfect gentleman,” she says.

Despite his obsession with making money and criminal enterprises, she believes that he will never return to a life of crime.

“He’s got that business mind, so in the background, he is always looking to make heaps of money because that’s him, he won’t settle for not living a high life, but he doesn’t ever want to end up back in jail,” Slowick says.

Now 47, a teary Merola confesses that he cries every day because he misses his old life. A life of crime. He believes that until his incarceration, he lived the best life in the world.

“My whole life, I’ve always had heaps of money and done well with every business I’ve bought and sold, but I’ve never hung onto it and always blown it,” he says.

“I get too greedy. Now I can’t even make 10 grand a month busting my balls, six days a week driving trucks. It’s the most boring job in the world. I feel like killing myself every day,” Merola says.