‘I’d rather the chemo’: A teenager’s battle with the black dog after beating cancer 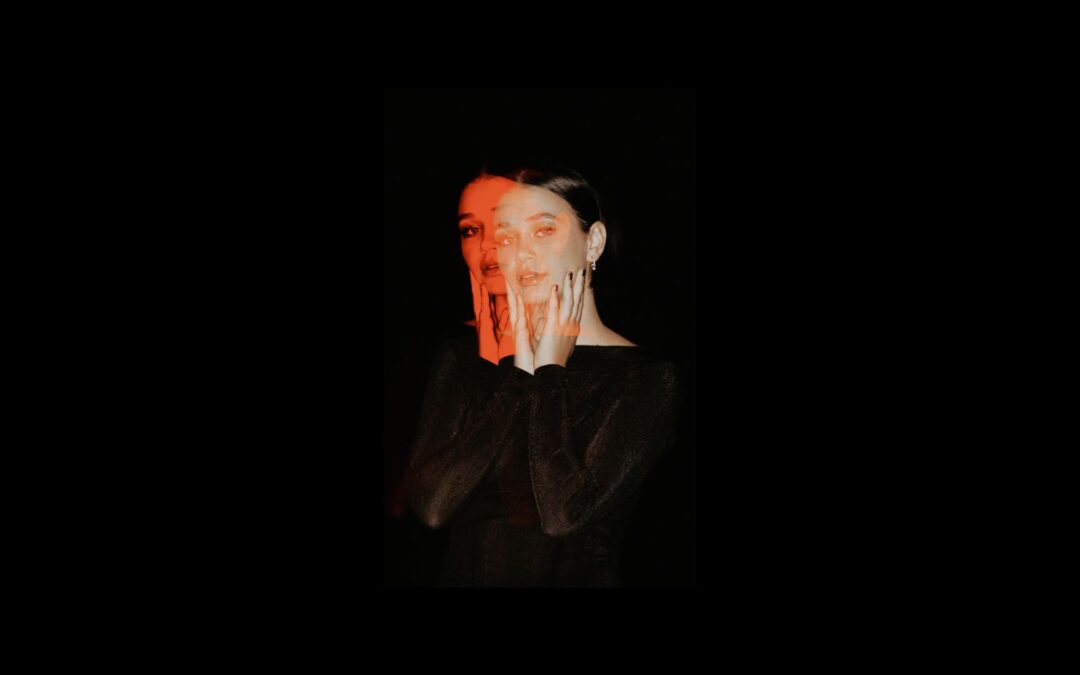 At 15-years-old, Georgia Rhodes wanted nothing more than to blend in with the crowd. But nothing makes you stand out like a cancer diagnosis. Only some are lucky enough to beat the disease, but according to Georgia, surviving after cancer is the bigger battle. How will being ‘the cancer kid’ define the rest of her life?

Georgia might just have the best eyelashes I’ve ever seen.

“How are they still so thick?” I ask.

“The doctors and nurses were more shocked than you about my eyelashes and eyebrows,” she says. “I just never lost them. I let Mum touch my hair, like fine, she could have that therapy. But she wasn’t touching my eyebrows.”

I’m glad her Mum let them be. Dark and fluffy, they draw your attention immediately to her glistening green eyes. And for a long time, they were one of the only things Georgia still recognised about herself.

I’m on Facetime with Georgia on a Sunday afternoon. She lives 10 hours away in Lismore, so not an easy drive for a cup of tea and a catch-up. She said she was free and ready to chat, but I’m not surprised that she’s sitting in her car, her face moving in and out of focus as she awkwardly fumbles with her phone.

“Sorry, I’m at the fields. I wanted to watch the soccer,” she says.

Georgia’s two older brothers shaped her love of soccer. They’re almost double her size, but she’d take them both on at once without fear of getting dirty or breaking a nail. She’d probably beat them too.

So, when Georgia found a strange bruise on her upper thigh in 2018, she wasn’t bothered.

“I was still at my old club playing juniors with all the boys. It was rough,” she says.

Georgia detested the idea of being different. The raised purple lump was only the size of a 50-cent coin but was the height of teenage social anxiety. Only when friends pointed it out did she get it checked.

“They were testing it to see if it was cancerous. I thought nothing of it, I just went about my life,” she says.

She still wasn’t concerned when her dad picked her up early from a friend’s sleepover about a week later.

“Honestly my initial thought was ‘fuck, Scotty [the family dog] is dying.”

A month before her 16th birthday, Georgia was diagnosed with Blastic Plasmacytoid Dendritic Cell Neoplasm. With features of both leukemia and lymphoma, BPDCN is common in elderly men, but extremely rare in children.

“At the time, I think there was one girl fighting it down in Victoria, one girl in remission in Queensland, and me. I was the third child to get it in Australia,” she says.

Just three days after diagnosis, Georgia was in Lady Cilento Children’s Hospital in Brisbane for her first surgery: a lumbar puncture and bone marrow aspiration.

Intermittent hospital stays, intense chemotherapy and specialist appointments filled the following months. She even did IVF treatment, harvesting 33 healthy eggs. A burdensome decision for any woman, Georgia makes light of the situation.

Georgia’s innocent demeanour is often betrayed by the cheeky glimmer in her eyes. Laughing in the face of morbidity made the experience bearable. And McDonalds strawberry donuts, apparently.

“They were my go-to!” Her face beams.

“Whenever I would have to fast for a surgery, we’d get Maccas for dinner beforehand and I would get a donut and save it for when I woke in the middle of the night.”

It’s surprising that any food paired well with the chemo cocktail of methotrexate in her spinal fluid and a peripherally inserted central catheter (PICC) line pumping medicine to the veins near her heart. While uncomfortable and taxing on the body, beginning to ‘look the part’ was most traumatic.

“I would say my hair was one of my best features.”

I must agree. As a little girl, she looked like she stepped right off the pages of Goldilocks and the Three Little Bears, her blonde virgin locks curled into ringlets, bouncing when brushed. Chemotherapy reduced her hair to just “three, straggly rats tails.”

“It got to the point where I was having a shower, getting out, drying myself, then having to get back in to wash all the hair off,” she says.

Georgia’s mother Kylie was the makeshift hairdresser, a dabble in the trade she never hoped for. The two became fiercely entwined through their shared experience. 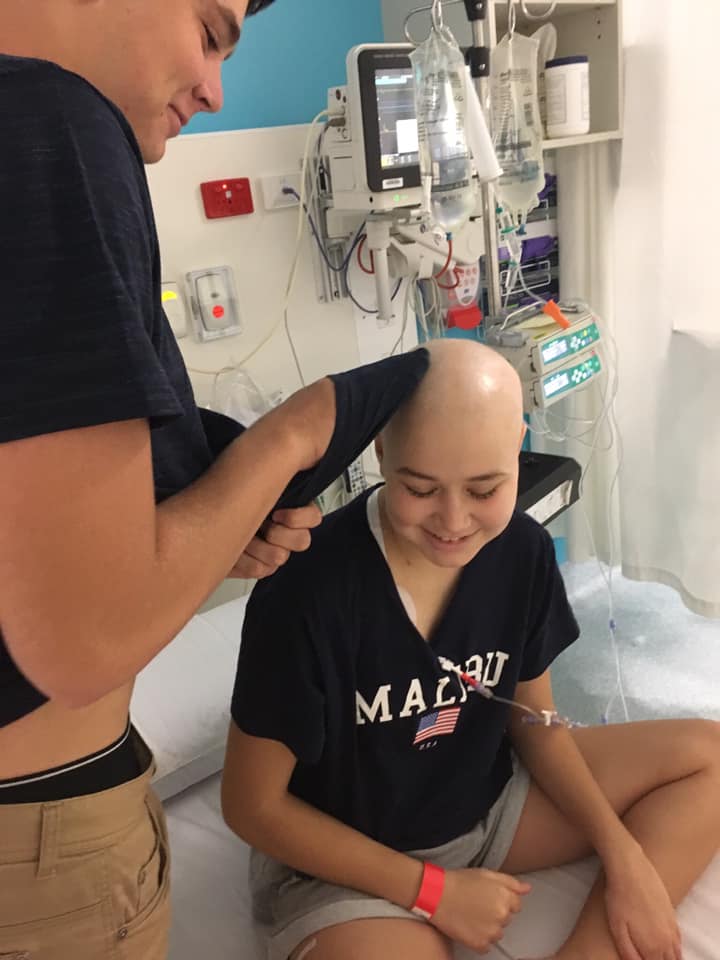 Georgia with her brother Nick during treatment. “We made the most out of every dark situation, it was always laughs,” Georgia says. Photo credit:
Kylie Bennett.

“I think we both felt such a weight come down on us. This was real, she looked so different, and this horrible disease had cost her the part of herself that gave her the most confidence,” Kylie says.

“I remember us both bawling, but I also remember thinking she looked so beautiful. She wouldn’t think so, but I could see so much in her that I was proud of.”

“I hated myself. I just cried. It wasn’t me. It was a slap in the face,” Georgia says, her voice breaking for the first time.

I didn’t recognise the Georgia I knew when I visited her between hospital stays. I was overly conscious that I might be saying goodbye to my cousin, but I wouldn’t speak that into existence. I remember her swollen and bruised face, the sheer exhaustion it took to stand up from the couch. And I’ll never forget her face when she found out about Nicole*.

Nicole was another Lismore girl – a family friend of years – also in Brisbane with cancer. We were watching the film Black Panther when Georgia’s mum got the call.

“She’s not going to make it, Georgie,” my aunty Kylie said. It’s safe to say I don’t remember the end of that movie.

Georgia was unable to attend Nicole’s funeral, too sick to leave hospital.

“We would always say that one of us is going to be at the other’s funeral, but we couldn’t have both. Then we couldn’t have either,” Georgia tells me today. Emotion got the better of us both at this point.

“I honestly thought Nicole hated me [after she passed]. Her other friends were getting signs from her in different ways, and I didn’t feel like I was getting anything. I thought she hated me because I survived. I still feel a bit that way.”

Georgia has her brother to thank for her survival, though she wouldn’t like me giving him such a big head. A bone marrow transplant was Georgia’s best hope, and luckily, Nick was a perfect match. Georgia now has Nick’s entire immune system – even her blood type changed to his.

The procedure came with risks, and it’s shocking as Georgia lists them off: Burkitt’s lymphoma, blood in her urine, sweat burning her skin, her cells rejecting the donor cells. Encountering any germ after the transplant could have been fatal.

“I felt like I was living in bubble-wrap,” she says. “Even my whole diet changed. I couldn’t have anything with preservatives. Meat had to be cooked to a certain temperature, water had to be filtered.”

“No Maccas donuts then,” I say.

“Exactly. I was basically a newborn baby, I started from absolute scratch.”

And it worked. Within a month, she was discharged from hospital and two months later, she was back in Lismore. The Facebook page updating family and friends went quiet. From the outside, she was better, but life was far from ‘normal’.

“My life was put on hold, but everyone else’s continued. Trying to fit back in was one of the most mentally exhausting things I’ve been through,” she says.

Because Georgia couldn’t complete schoolwork during treatment, she was held back a grade. She watched from the sidelines as her lifelong friends graduated school, dressed up for formal and looked towards university or employment.

“Honestly, I just wanted to go back to Brisbane. I didn’t want to be where my old life was. I had completely changed but everyone knew me as the old me,” she says.

“Cancer was a breeze compared to the mental struggle I dealt with.”

Today, aged 19, Georgia has completed school and has her sights set on the police force. It’s a logical choice – I wouldn’t want to get in her way. Life is certainly better, but those closest to her are keenly aware that some days, getting out of bed hurts just as much as chemo.

“Don’t get me wrong, she’s a beautiful woman now both inside and out, but there are pieces of her missing,” Kylie tells me.

The foreign body Georgia lives in is also a canvas for ink flowers, snakes and angels.

“I’ve got scars and bumps and bruises everywhere, they’re all part of it, and I’d rather that. But I also have tattoos now because it’s a way for me to take back the power of my body.”

“And my eyelashes and eyebrows, still can’t touch those.”

I’m grateful every day that I can still admire them.