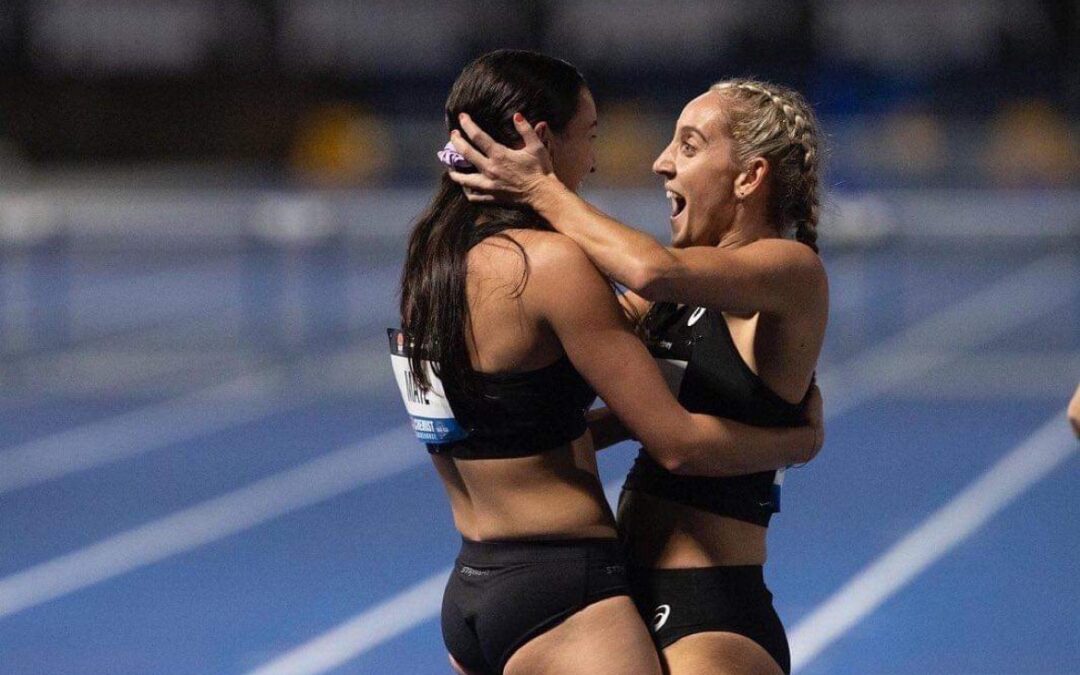 Thirroul hurdler and firefighter Brodee Mate has set her sights on success at the Oceania Championships next month after placing second to Tokyo Olympian and teammate Sarah Carli at the Australian titles.

As part of an 1100-strong NSW team, friends Carli and Mate came first and second, respectively, at the Australian championships in April. The pair became the two fastest women in the 400-metre hurdles in the country, and qualified for the Oceania event in Mackay.

Mate said it was the dream result and that it was Carli who kept her motivated.

“That moment was indescribable, I got to hurdle three and that’s when I knew something magical was going to happen, I was in absolute disbelief that Sarah and I had gone first and second,” Brodee said.

“We have a very tight squad and we are like sisters, Sarah has taught me to be resilient and sets the standard for me to push to and hopefully beat one day.”

The squad, led by coach Melissa Smith, has turned its attention to Mackay, where fresh-faced athletes and former Olympians will meet to work towards selection for World Championships.

Mate is gearing up for her first Australian team appearance in Mackay, and while she is hopeful and working to slice more than a second off her personal best of 58.2 ecs. She said there is a lot more training and preparation to be done.

“I am hoping to run 57 seconds, but if that doesn’t happen, I just want to enjoy the process, soak in all the experience of the competition and learn more about myself in this environment,” Mate said.

“But the squad gets 1 day of rest a week, we are constantly pushing ourselves every day, and I was getting quicker at training, but I haven’t had a rest.

“Usually we have a break after nationals, but I’ve had to keep pushing to work towards Oceania, so I’m just trying to take the pressure away from myself because it’s the last thing I need, otherwise I think I would fall apart.”

Mate is full-time co-chair of the Aboriginal and Torres Strait Islander Advisory Committee and a firefighter at Fire and Rescue NSW, and said the balancing act between work and sport can be challenging.

“At first, my fire and rescue work schedule affected my performance on the track, I created excuses that I was tired. I would right myself off before even giving it a go and I’d think I wasn’t going to race well, and then I wouldn’t because that’s what I believed,” she said.

“Since then, it’s taken three and a half years to find a routine, to learn to be ok with adapting to things and knowing I’ll still get the results, now I embrace the balance and fit in all my sessions with a hundred percent effort and determination.”

Mate said while her ultimate athletic dream was to “jump the sticks” alongside Carli as part of an international team at the World Championships, Commonwealth Games and/or the Olympics, her life goals reach beyond sport.

As an Aboriginal woman, Mate said she grew up idolising the strength and courage of Olympic champion Cathy Freeman. She said representing Australia at the Olympics could help set a precedent for other young Indigenous females who she claims face a lack of access to support to reach their full potential.

“If I could represent Australia, it not only would prove to myself that I am capable, but to many other young Indigenous females that they too, can dream wildly,” Mate said.

Mate said her visit to family in Biarrawee in May of last year was an eye-opener and proved to be the inspiration she needed to realise her dream of becoming an ambassador for remote Aboriginal communities.

“People have no idea how good they have it on the coast, they have nothing, and I have everything in my reach to make my dreams come true,” she said.

“There’s so much more talent out there, they just don’t have the resources to back themselves and give themselves a chance.”