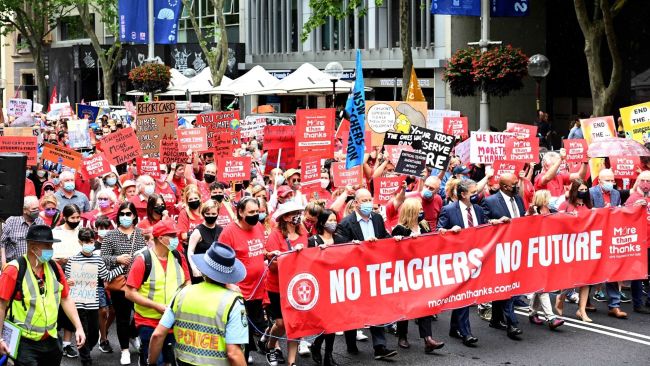 Public school teachers across the state will strike next Wednesday over pay and work conditions. The move followed a poll of over 10,000 of the union’s members that revealed teachers would continue to leave the profession if there was no change to employment arrangements.

“We have to take action, we’re in a crisis now and it’s a crisis that will worsen, we’re protesting against what the government is failing to do, inaction really is the problem,” Mr McDonald said.

“We haven’t been able to do get a salary increase and the nature of teaching has completely changed, we had an independent enquiry which reviewed our sector for 12 months which stated the impossible workload and unfair pay and still the government did nothing.

“In February of this year, there were 2351 permanent positions available across the state for public school teachers, not including casual or temporary roles,”

The Federation launched its “More than thanks” campaign last year, which asked for a pay increase and more action from the government.

“There is a state-wide shortage of teachers because the pay is not competitive and the overtime is unattainable,” Mr McDonald said.

As part of the protest action, the Teachers Federation declared its members would walk out of school if any state MP visited a public school.

The NSW Teachers Federation wants a pay rise of between 5% and 7.5% and two extra hours a week of planning time. Under current laws introduced by the Coalition government, public sector wages have been capped at a 2.5% increase.

The union also voted to ban the implementation of new government policies or initiatives that were been due to start at the beginning of Term 2.

Education Minister Sarah Mitchell said she was frustrated by the union action.

“It’s just really frustrating that the union have decided to take this action when they dont need to and all it does is disrupt hardworking parents and families and their kids who have had enough disruption over the past two years,” Ms Mitchell told 2GB this morning.

“I’m worried for my future and I don’t know if I’ve chosen the right degree now,” Mrs Jackson said.

“I hope by the time this is all over a fair agreement is made.”

Mr McDonald said enough was enough  and “ … we’ve done everything in our power but now it’s come to us to strike to show the government that we mean it when we say we want more than thanks.”