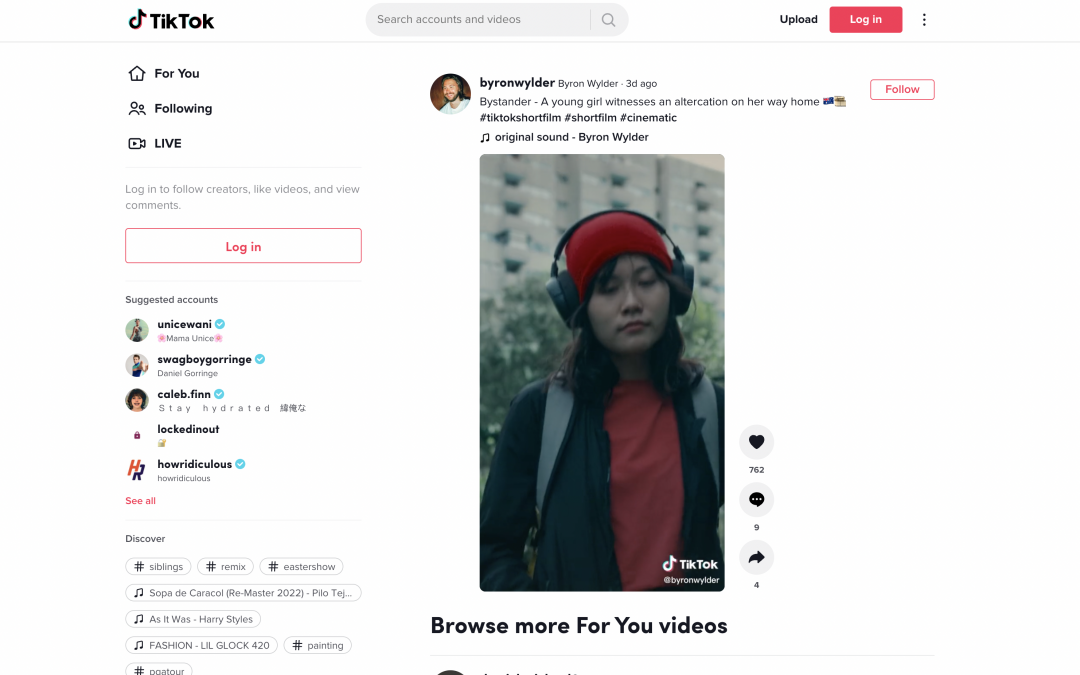 A University of Wollongong PhD candidate is the star of a new film created for social media consumption and, potentially, accolades.

Hop Dao, 25, who graduated with a Bachelor of Media and Communications in 2018 and who is now exploring the changing mindset of international students on the environment for her doctoral thesis, stars in ‘The Bystander‘, a short film created for the TikTok Short Film Festival in partnership with the Cannes Film Festival.

The film depicts a young woman confronted with a situation where police officers are assaulting a young Indigenous man and what she does in response.

“Not many people would react like the way the girl, the bystander, would do in the film,” Dao said.

“I was thinking about that a lot, and I was asking myself would I come and interfere with police if I were in her situation because the police appear to be, you know, someone that protect you, and everything they do is supposed to be right and serve the justice.”

The short film is the brainchild of Sydney-based director Byron Wylder.

Wylder, 26, said the ‘The Bystander‘ was inspired by real-life events, including the George Floyd case, but not any single incident.

“I thought of the multitude of phone footage people have captured of police officers physically assaulting people in public, often young men, both in Australia and, obviously, overseas,” Wylder said.

“That the tool of a phone’s camera being used to create conversations and shake the foundation of law enforcement, and its role is something too inviting for a storyteller not to consider.

“I think in Hop’s character you can imagine a situation where anyone else would either do what she did, or turn a blind eye and move on.

“I sadly feel I have been the second person far too much, not literally but there are moments I definitely wish I had the bravery to say something. The final look to camera is for me and anyone watching that thinks they aren’t complicit in cooperating in a system that benefits those in the majority, while disenfranchising the rest.”

Video: ‘The Bystander‘ director Byron Wylder speaks with UOWTV’s Shawn Burns about the movie, his approach and the TikTok world.

Dao and Wylder have considered the attraction of vertical video, like that seen on TikTok, and the impact it has had on storytelling.

“There’s actually a very basic reason movies are 16:9 (widescreen) and it’s mainly to do with marketing efforts in the time when television was becoming dominant,” Wylder said.

“Movies used to be 3:4 which you see in most classic cinema pre-60s, so the whole idea that it’s impossible or wrong to film in other ratios is quite silly.

“I’ve shot films in a square ratio and the widest CinemaScope ratio, and the truth is the story always dictates the mood which invites a certain frame size.

“Also the timeframe of just 16 days from when I learned of the competition to deliver was an amazing challenge and wouldn’t have been possible without so many people’s contribution.”

“It is really becoming the future of filmmaking, and also the advantage of it is you focus on the most important thing and you have really limited space for you to capture things, so you’ve got to choose what’s the most important in the scene and really focus on it,” she said.

The winners of the TikTok Short Film competition will be announced at the 75th Cannes Film Festival mid-May.