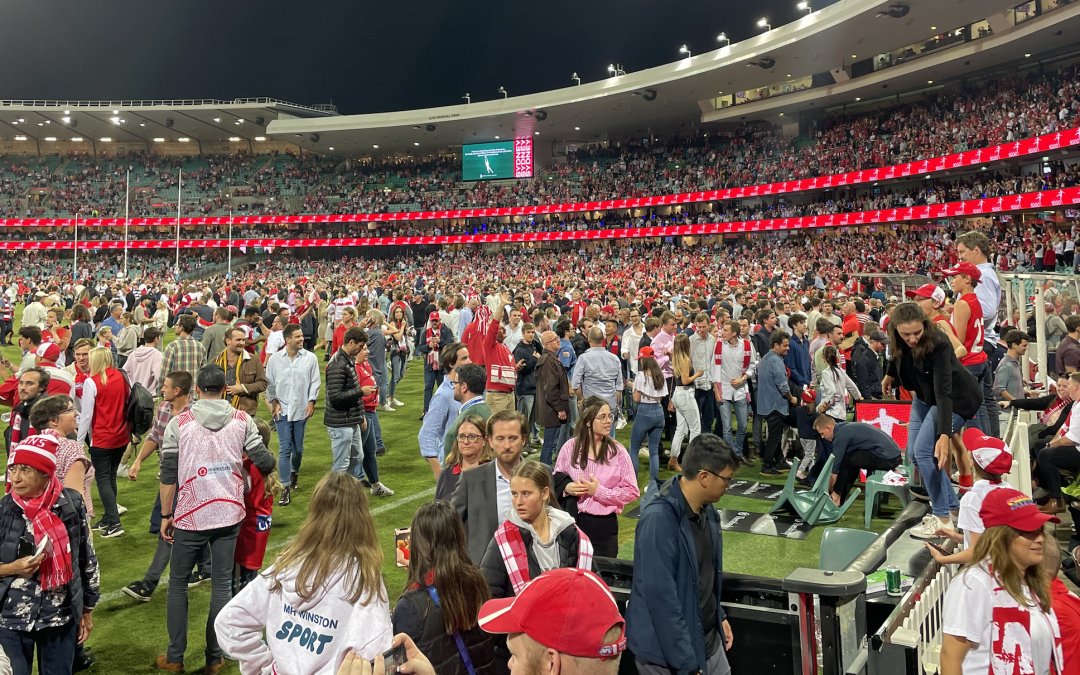 With six minutes to go in the final quarter, Franklin marked the ball at the northern end of the SCG, 45 out, on a slight angle. It was the same end that Tony ‘Plugger’ Lockett kicked his 1300th goal and history seemed ready to be written.

Fans lined the fence, set to invade the pitch, as it was almost a certainty Franklin would kick the goal.

As Franklin began his run-up, many excited fans had started their sprint onto the field, only to be joined soon after by 25,000 screaming counterparts all with one aim – get to Buddy.

Southern Power AFL player Montana Schow said excitement in the crowd was at an all-time-high.

“The atmosphere was pumping, and adrenaline was high as he got closer to the 1000,” Ms Schow said.

“I think I speak for all when I say I was pretty ecstatic when he kicked the final goal.”

According to Google trends, search terms relating to playing AFL increased in NSW on Friday night, reaching a peak at 10pm, the time Buddy kicked his historic goal.

Franklin controversially signed with the Sydney Swans nine years ago, after an illustrious eight years with Hawthorn.  Since then, AFL participation rates in NSW/ACT have steadily increased, with participation in Sydney up by 200% in the last decade.

Wollongong Lions Football Club president Michael Marning said the same could be said for participation rates in the Illawarra.

“Last year we had five teams, three men’s teams and two girls teams, so we had 193 players on the books just in seniors,” Marning said.

“I reckon between Plugger, Spider (Peter Everitt) and Buddy, the combination of all three of those guys that the Swans have marketed really well, it has helped grow the game.”

UOW Bulldogs AFLW co-coach Allie Phillips said it was amazing for a traditionally rugby league state to have this historical moment tied to Aussie Rules footy in NSW.

“There’s a big rugby focus but having the Giants and the Swannies come through and having it played at the SCG and being such a milestone was amazing for footy in general,” Phillips said.

“But for boys and girls seeing him do that and having that free marketing to go, man I’d love to do that, that would be so cool, people want to get involved.”