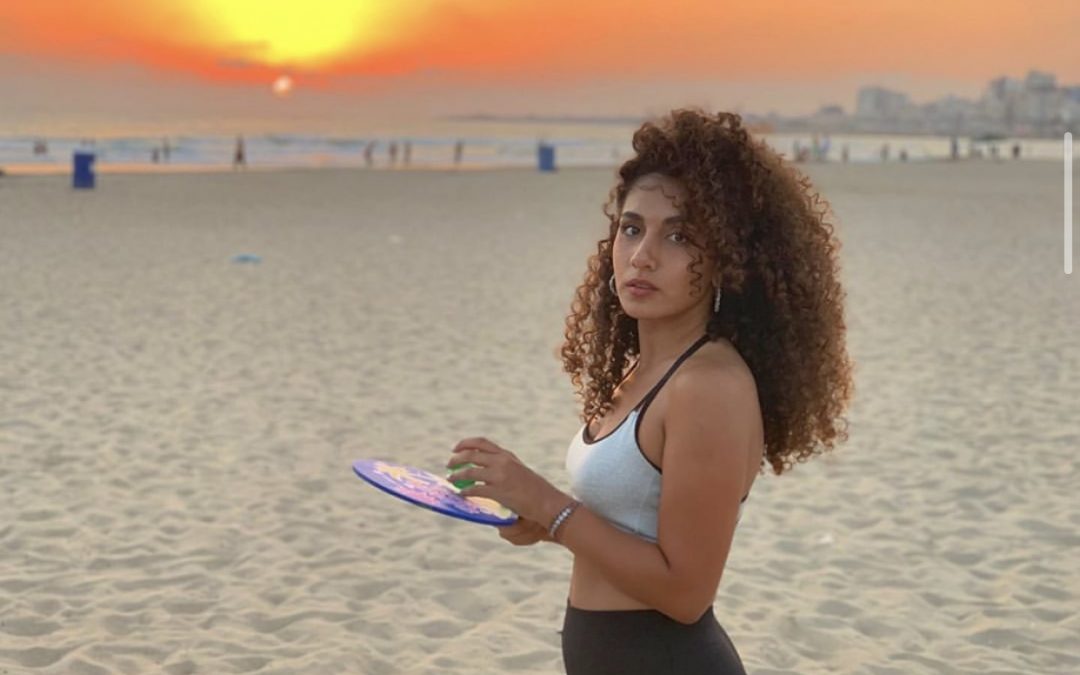 Growing up in Lebanon, Nour Wahid has witnessed her home slowly unravelling. A country once known for its serene beauty and economic prosperity has suffered unimaginable trauma.

‘Sorry, I just have to move away from the window’, sighs Nour. With its thick Arabic-French accent, her voice is a delicious combination of her native languages. She flicks her eyes, blackened with fatigue, toward the glass and points. ‘I don’t want to get hit by the bullets.’

She’s talking about the shooting happening outside her house, in the streets of Ras el Nabeh, a small suburb in Beirut. ‘Better off in a walled room where I won’t be caught in the crossfire,’ she murmurs nonchalantly. The relentless cracking of firearms does little to bother the young woman, as she cradles the laptop in her only free arm.

Her left arm comes into view, bound in a cast and sling. As she repositions herself, the video call severs momentarily. It takes three minutes to reconnect. ‘Sorry, again,’ she repeats. ‘We only have access to electricity 12 hours a day and it cuts out often’.

For Nour, power cuts and acts of violence are a daily expectation. Lebanon’s history is enshrined in civil unrest and large-scale turmoil, and for 25 years, she’s lived through it. She, and millions of others, have borne witness to invasions, border tensions, a refugee crisis, and most recently mass protests and an explosion which ravaged the nation’s capital.

Since 2019, a series of protests known locally as the “October Revolution” have been ongoing. What began as modest gatherings resisting planned taxes on gasoline, tobacco and oddly enough, Internet voice-call services, quickly spread into country-wide condemnation of sectarian rule, harsh unemployment rates and a stagnant economy. As the protests intensified, so too has the poor state of the country and the instability of the government.

Nour is anxious to explain that Lebanon’s media coverage in Western society represents only the tip of the iceberg. ‘This is the problem with the media, it only covers what happened, instantly – but what’s more important is what’s happening to the people, this city and this country, afterwards,’ she says rapidly.

Nour’s story, like the bullets still echoing in the background of the call, is haunting and very, very real.

‘The oldest memories I have, it was war,’ she laughs sardonically, a grimace settling into the lines of her face. ‘I cannot even remember a lovely memory about my childhood. Even though there was a lot, but always, the bad memories overpower the good.’

Growing up in a wealthy family, Nour divided her time between two houses – a holiday-house in the South of Lebanon and her home in Beirut. She and her mother spent the summer of 1996 in the South, in their hometown Qana – an area faced with constant shellings at the hands of the Israelis. It was there that the then three-year old first cheated death.

As the summer progressed, the attacks worsened. Unsafe in their village, Nour’s mother made the decision to seek protection at a nearby UN shelter. ‘My Dad called from Beirut where he was working, he saw what was happening on the TV and told us to come home right away.’ Her tone becomes insistent as she imitates her father. ‘My mother wanted to go to the shelter because she believed it was safest but he told us not to. The moment we left our village, that day, the shelter was attacked.’

Known as the “Qana Massacre”, over a hundred refugees taking shelter at the UN compound were killed, half of whom were children. It was later confirmed the shelling was undertaken deliberately by the Israelis.  Nour shakes her head at the memory, pausing for the first time in several minutes. ‘A lot of people died; we were supposed to be among them,’ she murmurs.

No sooner had they arrived in Beirut than another devastating attack occurred – this time, it was the 2005 explosion intended to assassinate then Prime Minister of Lebanon, Rafic Hariri. Scarcely 12 years old, Nour was playing in her school field, soaking up the mid-afternoon sun, when the bomb was detonated. ‘My friends were killed, one of them is in a coma still, a teacher died too. And I am alive.’ A fleeting look of guilt crosses her face.  ‘But, even by then, we were used to such things,’ she says with a sigh. This was her second cheating.

And on it went. Nour experienced a never-ending chain of traumatic events, with each stripping away her childhood innocence. For her and her family, death it seemed was impending, around each corner, stalking. ‘I grew up with Israeli attacks always. It was normal. We used to swim in the pool with airstrikes happening above us. We used to play amongst the shellings,’ she explains indifferently.

It wasn’t until 2012, when Nour had reached adulthood, that her world began to change for the better. She graduated high school in Beirut, started her studies at Alba University and – with the economy stabilising – was hired as a communications officer. Despite Syrian border tensions and an influx of refugees, the city was making a comeback from political upheaval and civil violence. Nour smiles when asked how she felt seeing the community prosper. ‘We thought this would be the end of everything. That it was over and we were entering a new phase, a new life. Things were starting to get better.’

As Nour’s savings grew, so too did her urge to travel the world, a dream her youth had not afforded her. At the beginning of 2019 she left her finally-thriving country to explore much of Europe. Every new location, friend met and experience had, helped ease her childhood trauma.

She was in Amsterdam, months later, when she received a call from her mother. The October Revolution had begun. ‘All the people came to the streets and they said enough is enough. We don’t want religious political parties anymore, we just want a civil society,’ she says. ‘This is when things got really, really bad again.’ Nour boarded the next available flight home.

The streets of Lebanon were inundated with protesters throughout the end of 2019 and into much of 2020. They were desperate, struggling to cope with their country’s inevitable decline toward poverty. ‘This is what was happening,’ Nour stresses, counting on her fingers:  ‘No fuel for cars, no bread, no electricity and no money.’ Her small frame folds into itself, exhaustion weighing her shoulders down. A ghost of a sad smile lingers on her lips as she is asked what happened next. ‘Then came the cherry on the top.’

The destruction was the result of an explosion equivalent to an atomic bomb. 2,750 tonnes of ammonium nitrate, improperly stored in a warehouse at Beirut’s port for six years, were the cause. The port – the lifeblood of the small coastal nation – was utterly devastated, dealing a shattering blow to an already crippled economy and community. Streets were ripped apart, cars flipped over and two hundred people killed.

Nour’s eyelashes squeeze against her cheeks, disappearing entirely into the folds of her eyelids as she forces them tightly shut. They don’t open as she says, ‘It was bad. It was really, really bad.’

Nour had just arrived home – a 10-minute walk from the port – and was organising an outfit to wear out that evening with her sister when the initial explosion occurred. ‘We felt the house trembling around us and thought it was an earthquake,’ she exclaims. In the following 30 seconds, she urged her sister away from the window and toward a concrete hallway at the front of their house. Just as they reached the front door, the second eruption ripped through the capital.

‘I don’t really remember what happened, but one second I was telling my sister not to go outside, the next I was flying, FLYING, through the air,’ she exclaims. The sheer force of the blast sent Nour and her sister backward into the air, travelling for some metres before landing against a wall. ‘I remember trying to get up but something was weighing me down,’ she recalls, ‘Then I realised that our front door was on top of me, that’s how I got this.’ She nods toward her forearm. Every window in the house was shattered, furniture overturned and the front door ripped from the ground. This damage was considered minor in comparison to other parts of the city.

Adara* is Nour’s nine-year-old niece. Her home is marginally closer to the Port and was all but destroyed in the blast. She declares the same initial misunderstanding as her aunty regarding the explosion. ‘I was in my bedroom when the ground started rumbling, I thought it was an earthquake!’ she explains excitedly. ‘But then everything went boom and the window fell on my head.’ Her small hands wave about the screen chaotically in an attempt to demonstrate how the window fell. She is also particularly keen to show off her injuries obtained in the blast.

‘I ran away and down the stairs but I had no shoes on so I cut all of my feet,’ she stresses, holding up her bandaged foot to the computer’s camera. ‘There’s stitches under there too!’ When asked if she is worried a similar event will happen again, her reply eerily echoes something Nour had mentioned previously, ‘Yes but it’s okay, I’m used to it.’

Silence falls for more than a minute after Nour is asked if she wishes she could be somewhere else. She sits, fingernails in her teeth, considering the question. ‘Two years ago, I would have answered this very differently. Back then, I was contemplating studying abroad, but I said to myself, “Listen Nour, your parents are growing older, you have the chance to study in your own country and make it a better place for everyone else, it’s becoming better, people are becoming less religious.” So, I made the decision to stay by my parents. But now? I have two options, either I stick by their side again as they become jobless in the coming months with the risk that I lose my job too and we sink together. Or, I try to get abroad and I can send them money from a safer place. I choose the second option.’

The woman sitting behind the screen is every bit a projection of her country’s capital. She exudes great strength and beauty but also devastation. She continues to rise in the face of adversity, time and time again. ‘I do what I can to survive,’ she says, with a shrug.  As for Lebanon, help is needed, desperately.

Nour is currently waiting for her immigration application to be accepted. It’s a painstakingly long process on which her very livelihood depends. Until then, she continues to work, only now from a different office further away from the port. Each day she chooses to walk a 30-minute path down backstreets to get to the building, rather than the 10-minute main street alternative. She does this to avoid any riots or violence which might involve firearms, because she doesn’t want to get hit by the bullets.

There are only so many times a girl gets to cheat death.

* Name has been changed to protect the identity of a minor