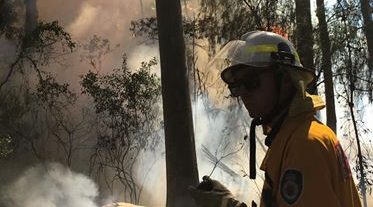 Many Narooma firefighters have mental health concerns in the aftermath of the Australian bushfires last summer.

Anxiety and Post Traumatic Stress Disorder have been identified in firefighters, many of who are now gearing up to battle the next fire season.

Volunteer community firefighter of 10 years, Sean Cavanagh is one of those feeling the strain.

“It has been really hard on my mental health,” he said.

“During the summer, I didn’t really notice any anxiety. Everything was so frantic.

“I had no time on my hands to think about myself.”

It was only when the fires were under control and Mr Cavanagh had more time on his hands, that he began to notice the changes.

“It was only after the fires had subsided that I noticed anxiety creeping up on me,” he said.

“At the beginning I was having trouble sleeping and was constantly nervous and struggled when I was on my own.”

At first Mr Cavanagh said he didn’t realise he was suffering from a mental illness.

“I didn’t actually know I was suffering from anxiety for a long period of time,” he said.

“The fact that I didn’t realise certainly contributed to the severity, I began getting unusually emotional when out drinking with my friends.”

The first person to notice that Mr Cavanagh might have been suffering from PTSD was his mother Rebecca Cavanagh.

“I definitely noticed something was up with him and understandably so,” she said.

“He is my son and he is the most selfless young man I know.

“He has done so much for the community.”

Mr Cavanagh has started the process of overcoming his anxiety by talking with his friends and family about his experiences fighting the fires.

“Once we realised what was going on and I started allowing myself to open up I began to feel a lot better,” he said.

“They were extremely comforting and understanding and I would encourage all the others that might be going through the same thing to talk to their loved ones.”

Mr Cavanagh said surrounding yourself with a good support system was key in battling a mental illness.