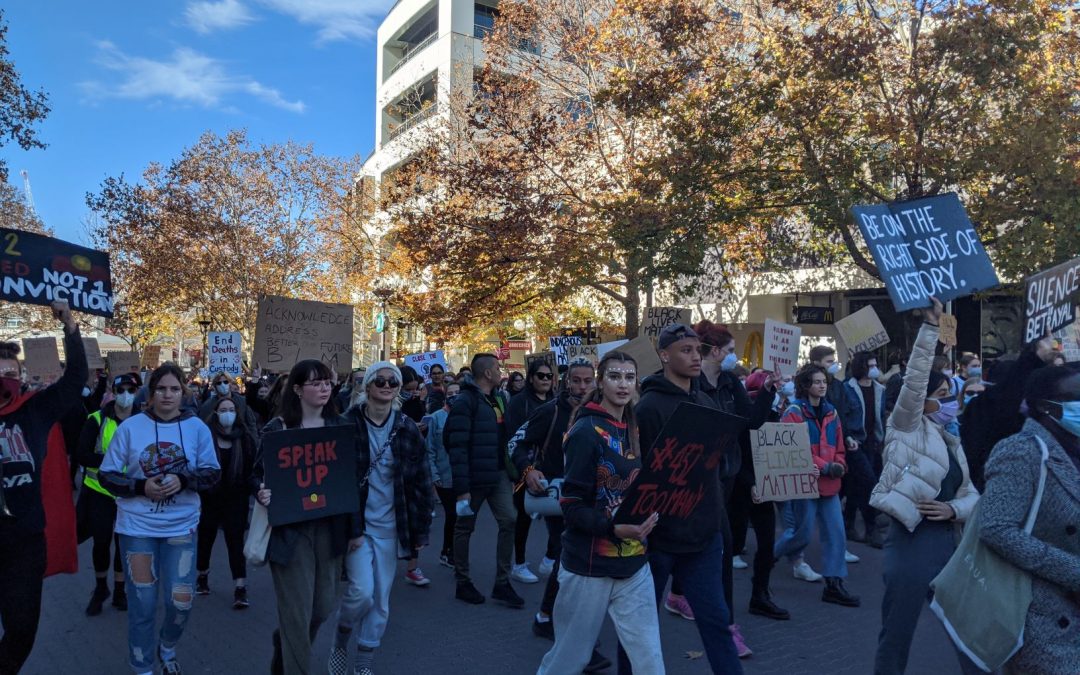 Indigenous rights activists in the ACT have called on Australians to “educate themselves” during a Black Lives Matter protest at Parliament House.

Hundreds of Canberrans marched from Civic to the Prime Minister’s office protesting the mistreatment of Aboriginal and Torres Strait Islander people around Australia.

Wiradjuri, Wongaibon woman, Dindi Huckle-Moran, was one of many indigenous youth activists who spoke at the event. She said that education and recognition of the past was key to improving the quality of life for Aboriginal people.

“This is about so much more than just me. It’s about my family, it’s about my ancestors, it’s about freedom of expression to be who you are in this world without prejudice, without discrimination and it’s about raising awareness for Indigenous people of all shades, that we are disadvantaged,” Ms Huckle-Moran said.

Ms Huckle-Moran speaks out at the Canberra protest:

Racism towards Aboriginal Australians was a prominent message during the protest.

Indigenous rights activist and stolen generation survivor, Helen Moran, has spent 20 years protesting for the rights of Aboriginal Australians. She said older generations from non-indigenous backgrounds needed to be educated about the injustices.

“When you learn and understand then you need to share and take responsibility and it doesn’t just go down in generations, it needs to go up because you’ve got parents and grandparents who are ignorant and racist,” Ms Moran said.

Ms Moran believed the gathering of young indigenous and non-indigenous people standing together to fight for the rights of Aboriginal people was a great achievement and a step forward in the right direction.

“I was really impressed with how many young people were there,” she said.

“It made me feel confident about the future of the rights of Indigenous people in this country with so many young people carrying the flags.”

The Canberra ‘Black Lives Matter’ event was part of nationwide protests that took place around Australia.

The demonstrations were sparked by the death in custody of black American man, George Floyd, in Minnesota on May 25.

Canberra activists have picked up on the key theme of education encouraged during the worldwide protests.