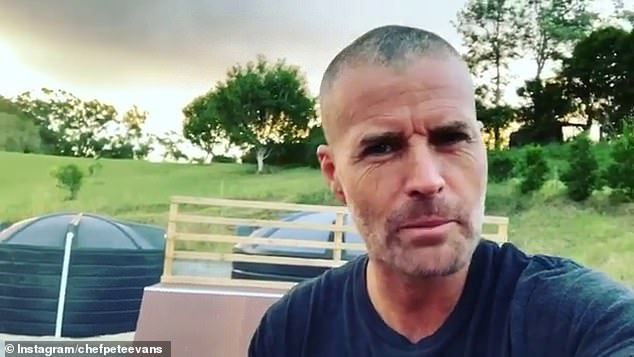 Celebrity chef and now former My Kitchen Rules judge Pete Evans has become renowned for his controversial diet and health recommendations over the years. From bone broth for babies to sun gazing therapy, Evans recommends strange and sometimes dangerous health endorsements. After his recent dismissal as judge from MKR, his social media features bizarre conspiracy theories surrounding the coronavirus. Here are six times he’s posted something strange on social media.

1. The Light Machine he said could cure coronavirus

This guy just doesn’t get it. Pete Evans is trying to sell a $15,000 fancy light machine to vulnerable and frightened people to protect them against #COVID_19.
He is not a doctor.
He is not a scientist.
He is a chef. pic.twitter.com/q6nWb3EojB

Evans faced a $25,000 fine after telling viewers on Facebook live that a product called a “biocharger” was an effective treatment for coronavirus. The Theraputic Goods Association found his claims about the light machine to be misleading.

2. Selfie with an anti-vaxxer

Taken in January this year, Evans’ photo with well-known anti-vaccination campaigner Robert Kennedy Junior caused a stir in the media. Yahoo News reported viewers were questioning the chef’s public platform as a judge on MKR.

Everyday I love to immerse myself in an experience within the cleansing ocean water as well as a brief gaze into the radiant light of the early rising or late setting Sun. These simple, yet powerful practices have got to be two of the best forms of free medicine on the planet for body, mind and spirit. #sungazing 🌞👁💦❤️

This is perhaps the strangest of all. In this instagram post Evans preaches the health benefits of staring into the sun for 10 seconds ever day. Before you try it at home, a spokesperson told Body and Soul magazine the practice could “cause permanent vision loss and increase your risk of developing cataracts or even melanoma of the eye”.

In a Facebook Q&A, Evans told his viewers:
“The silly thing is people put on normal chemical sunscreen then lay out in the sun for hours on end and think that they are safe because they have covered themselves in poisonous chemicals.”

5. Fluoride is a ‘neurotoxin’

While he did post a link to a study about fluoride, the Sydney Morning Herald reported authors had not only “misrepresented the conclusions of the existing literature,” but they had also ignored other factors and “made a basic error in reporting the results of their own model,” said the regional director of Public Health England.

This is just one of the coronavirus conspiracy theories Evans has shared recently on Instagram. The diagram traces funding for the Bill and Melinda Gates foundation, which he said in the caption “if you thought multinational food ties to health authorities was interesting, this could be a whole other level.”