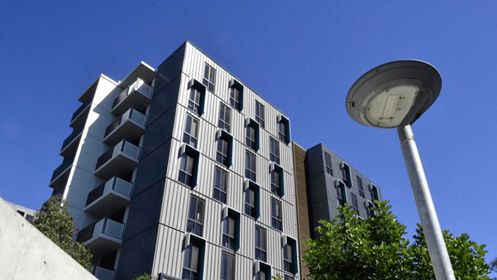 A former University of Wollongong on-campus resident has claimed the building she lived in did not meet her disability needs.

Macy Torrington, a wheelchair user who was a student leader at Kooloobong Village (Building 73) last year, said it was dangerous for her to leave via the building’s main entrance.

“I did (use it) a few times and it was just scary. It was on a really, really steep hill that had a crappy pathway,” Ms Torrington said.

“You know one of those dips that links a ramp onto a road to cross? There’s one of those turning the corner just when you are at the bottom.

“That’s where it is a massive risk for (of) going out onto the road if you slip or if you lose control. If I used it, I was in danger of basically tipping out or going onto the road and being hit by a car.”

Ms Torrington said she felt she was left with no option but to exit the building through a bike storage area via the garbage bin room.

“It was always super gross. There’s two entrances and exits, there’s one at the front, which is the one with the crappy pathway, and there’s the back,” she said.

“That had a ramp because the bins were all on wheels. It was a bit degrading.”

A statement from a UOW spokesperson said building 73 is in line with government disability access standards.

“Kooloobong Village actively engages residents in a discussion about how we can best support their needs and make reasonable adjustments,” the spokesperson said.

“Alternative arrangements for access to internal pathways have been made in consultation with affected residents, but these have never included moving through a bin room.

“Buildings 73, 74 and 75 have been constructed to the current building code for fire and disability compliance as per government regulations.”

Student residences are due to be audited for accessibility and inclusion by the end of 2020 under UOW’s Accessibility Action Plan 2019-2021.