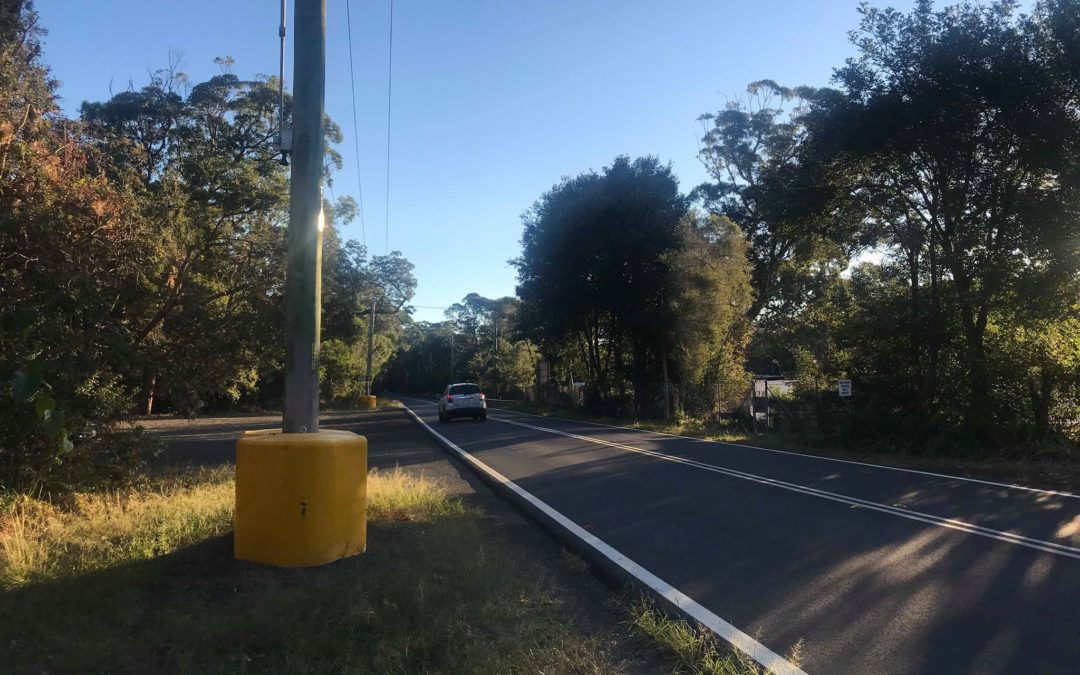 The initiative has seen the installation of Raptor crash cushions along the stretch of road adjacent to Seven Mile Beach Holiday Park, which has been the location of four crashes in the past five years.

“The bare poles offer no energy absorption during impact, subsequently the occupants and vehicle take on that energy and the consequences are quite obvious,” Ms Burns said.

“Raptor cushions act to absorb this energy, which could greatly reduce the extent of harm caused by an accident.”

The cushions have been wrapped around not only poles, but trees as well.

Ms Burns said the crash cushions would not cause environmental harm to the area.

“The Raptor material is recyclable, does not leach into the ground surface and can be removed from the location if any issues occur,” she said.

Kiama Council received funding from the NSW Road and Maritime Service to trial the Raptors as well as a variety of other safety measures at Gerroa.

Nurse Vivienne Beddoe, who was involved in a serious motor vehicle accident at the black spot in 2009, believes the Raptor cushions are a necessity.

“I suffered 25% permanent impairment as a result of my accident, had the tree I collided head-on with had some cushioning, my injuries would not have been so extensive,” she said.

“My small Astra car did all the right things, but it was demolished by the force of the crash.

“Obviously every tree and pole can’t be wrapped, but it certainly needs to be done at all identified black spots.”

Raptor cushions are available in either yellow or black, with Council opting for yellow to ensure a higher level of visibility in order to alert drivers of a roadside hazard.

Kiama Council will continue to monitor the statistics of road crashes involving utility poles in the area.

If successful, the implementation of Raptor crash cushions will be considered at other black spots.