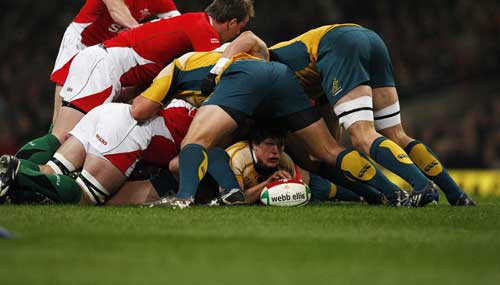 A prominent rugby union personality has called for assistant referees to be on the field and more involved in offside decisions, but local rugby club members disagree.

Former Wallabies coach Rod Macqueen said the defensive line falling offside is a common issue in the game, and is something the assistant referees should be held to higher account for.

“I think that should be strictly policed by the assistant referees. It would make a significant difference to the game. I just feel it is an area of the game we have allowed to get worse and worse,” Macqueen told The Australian.

“By making it really strict — that you must be behind the last feet — it could open up all manner of opportunities. I’m making this recommendation out of sheer frustration. I’m tired of watching matches where I am constantly saying, ‘He’s off-side, he’s off-side’.”

Macqueen (centre) after the 1999 Rugby World Cup victory in Cardiff.

UOW Rugby Club member and coach Will Harris doesn’t support these recommendations and said one referee would be more sufficient.

“As both an active player and coach in the club I believe that assistant refs should not be allowed on the field and it should just be one referee,” Harris said.

“Many years ago, the touch judge was only allowed to make calls in regards to the touch line, though in recent years touch judges have been promoted to assistant referees and allowed to judge on the game and support the ref from the sideline.”

The change Mr Harris is referring to is the 2005 decision by the International Rugby Board’s law committee to change the description and title of ‘touch judges’ to ‘assistant referees’. Mr Macqueen was in fact in that committee at the time of the decision. The ruling changed the title itself, but the roles of the referees didn’t change in real time.

A diagram showing the ‘offside line’, the line that Macqueen is calling for more patrol over from assistant referees. Credit: Sarah Gore

Illawarra District Rugby Union Association Senior Rugby Chairman and Director Steve Tresidder has been involved in the game since playing with Dapto in the 1980’s, and believes that this is one thing that shouldn’t change.

“That’s going a little too far,” Tresidder said in relation to Macqueen’s suggestions.

“Same as if the player is slightly off side but nowhere near the play assistant, referees should be able to tell him to get back. We don’t want the game to stop start all the time for someone that has no effect on the game,” he said.

The main concerns from both Tresidder and Harris have to do with the flow of the game.

“Due to the complexity around the ruck and the flow of the game, I believe having more than one ref on the field would have a negative impact on the game. This is because often tactics of rugby are adapted on the field to the way the ref is reffing the game,” Harris said.

The comments from Mr Macqueen are unlikely to evolve into any real change within the game, however it is expected to raise questions about the effectiveness of off-side calls.