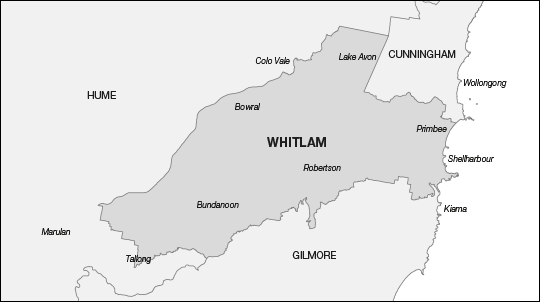 The Whitlam electorate is a consistent Labor seat that is poised to remain in the Labor fold in the upcoming election.

The division of Whitlam includes the Southern Illawarra and the Southern Highlands. The electorate consists of suburbs surrounding Shellharbour, Dapto, Albion Park and Lake Illawarra, and stretches up to Moss Vale, Mittagong, and Robertson. The seat stretches an area of around 1,300 square kilometres.

Whitlam was formerly known as Throsby until 2016, when it was renamed after Former Prime Minister Gough Whitlam who passed away in 2014. Historically the seat of Whitlam is a safe Labor seat, with a current margin of 13.7 per cent.

The current member is Stephen Jones of the Labor Party. Jones is the Shadow Minister for Regional Services, Territories and Local Government and Regional Communications.

He was first elected to the Federal Parliament in 2010 and re-elected twice since.

Other current candidates that are enrolled for the upcoming May 2019 election are Jamie Dixon for the Greens and Angelo Cuda for the United Australia Party.