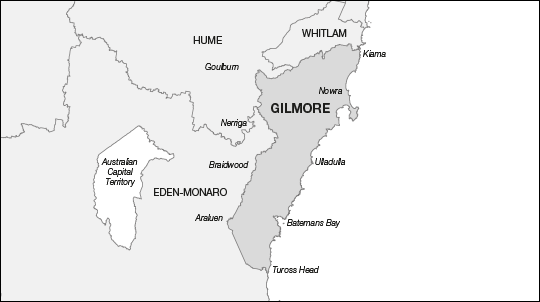 The seat of Gilmore is looking likely to be one of the most tightly contested races in the upcoming federal election for 2019.

Gilmore covers approximately six thousand square kilometres along the coastline from Kiama south to Tuross Head, and has a total of around 150,000 electors. This electorate is considered a rural area, where major industries in include, tourism, timber, dairy, steel fabrication, and fishing.

It is the most marginal federal seat in NSW for the Liberal Party, with a thin margin of 0.7 per cent. Liberal-held since 1996, the current Federal Member for Gilmore is Ann Sudmalis, who is retiring at this election.

After announcing that she would vacate her seat last year, Ms Sudmalis accused Member for Kiama Gareth Ward of “bullying, betrayal and backstabbing” through her use of parliamentary privilege in what was a controversial message.

Some of the other candidates that have confirmed their nomination include: Fiona Phillips (Labor), Grant Schultz (Independent), Katrina Hodgkinson (Nationals),Carmel McCallum (Greens), and Milton Leslight (United Australia Party).