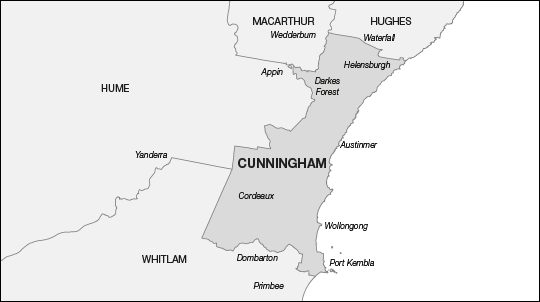 Labor is favoured once again to retain control of Cunningham at the 2019 federal election, continuing its strong showing in the seat.

The division of Cunningham begins in the southern Illawarra at Warrawong, stretching to parts of Unanderra and Famborough Heights through the centre of Wollongong and into the northern suburbs finishing in Helensburgh.

Cunningham stretches over 519 square kilometres, and is smaller than its neighbouring electorates of Whitlam and Gilmore. There are currently over 110,000 electors enrolled in this division.

The sitting member, Sharon Bird of the Labor Party is heading into 15 years in the seat. Bird was born in Wollongong, and became a high school teacher and a TAFE teacher before entering parliament at her second attempt.

Bird was elected the House of Representatives for Cunningham in 2004, and was then re-elected four times. She was the Shadow Minister for Vocational Education from October 2013 until July 2016.

Labor holds the seat comfortably with a margin of 11.3 per cent.

Other candidates which have confirmed their nominations include: Rowan Huxtable for the Greens, John McSweyn for the United Australia Party and John Flanagan for the Non-Custodial Parents Party, also known as known as Equal Parenting.