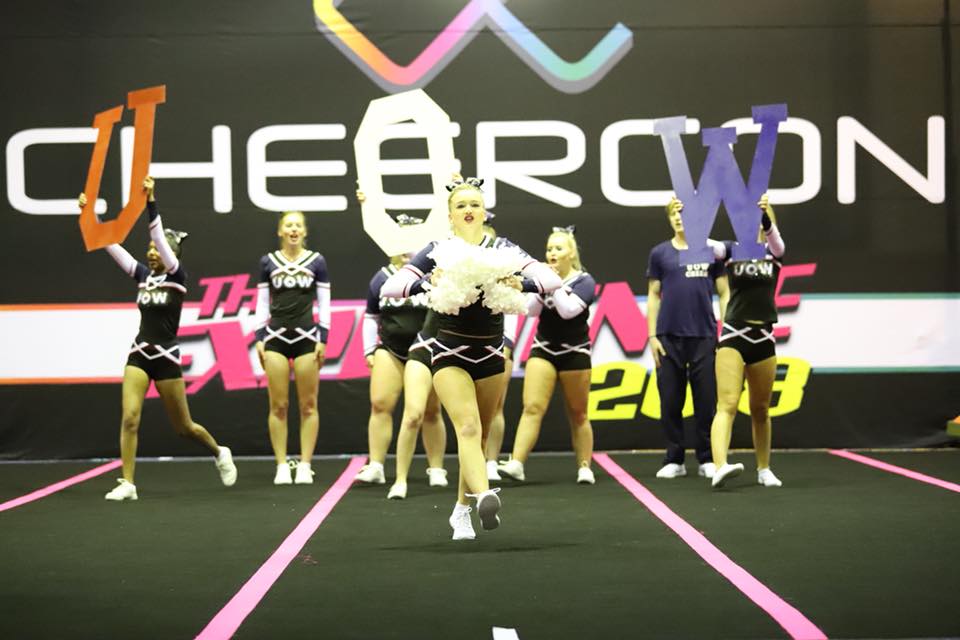 March is National Safety in Cheerleading Month, an opportunity to recognise the risks involved in what has become a serious athletic sport.

While the spotlight has recently again been shone on the dangers of concussions in football, the risk of concussion in cheerleading has become more prevalent as the sport evolves.

UOW Cheerleading coach Rebecca Edwards said cheerleading has moved a long way from the sidelines. She said it is now a competitive sport separate from the football it often accompanies, and it requires high-level training.

“Cheerleading is just as, if not more, physically demanding than most sports,” Edward said.

“Our training and routines require hours of practice each week to improve our strength, stamina, timing, balance, skill and explosive power – to name a few.

“It is not an easy feat to throw someone above your head height and catch them safely back in your arms or in your hands, while they twist and complete shape.”

Cheerleading is considered one of the most dangerous high school sports in America. According to National Center for Catastrophic Sport Injury Research data, 37 per cent of cheerleading accidents result in concussions. The statistics show more head injuries are caused by cheerleading than high school football.

“Injuries can last a lifetime if not taken proper care of. It is important to take necessary rests when needed. We can try to avoid these as much as possible and the sport must be taken seriously,” Edwards said.

The spot has grown in popularity in Australia. UOW Cheerleading Club has doubled its membership numbers over the last year and has added a team.

UOW Cheerleading Club president Toni Muditt said it was important to focus on safety practices in all high-risk sports.

“For us, we make sure all our coaches have the credentials to teach at certain levels and to keep updating those,” Muditt Said.

“It is up to coaches to understand the risk and to condition their teams in order to keep them safe.”