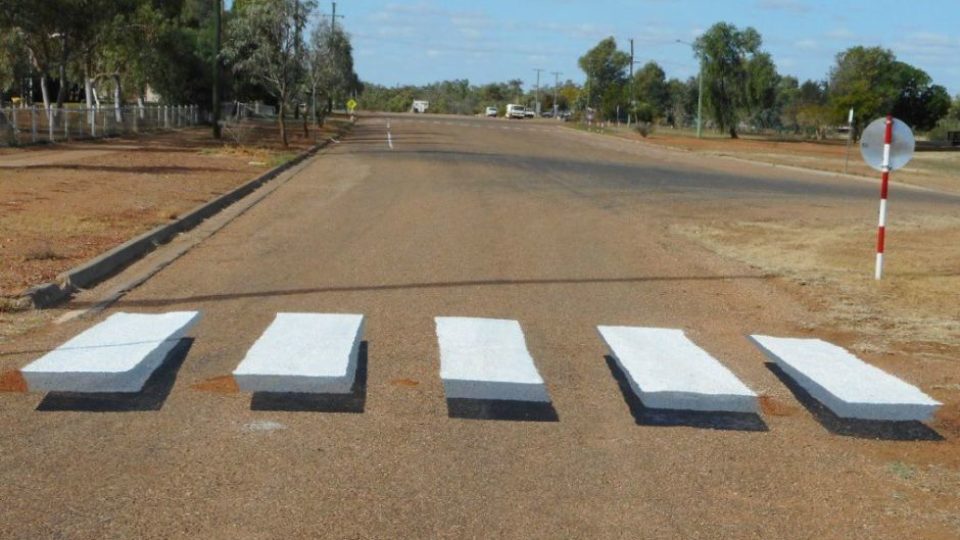 Unconventional 3D pedestrian crossings have been popping up in Australia, but academics claim it’s crucial the crossings are better evaluated before being used more broadly.

The crossings are similar to a regular pedestrian crossing, but the lines are painted to create an optical illusion of three-dimensional blocks rising above the road.

The illusion is designed to slow the driver down.

Academic and elected member of the Executive Committee of the Australasian College of Road Safety, Dr Julie Hatfield said the long-term effect of the crossings is difficult to predict.

“A motorist approaching it for the first time would be likely to slow down, due to its novelty and because it looks like an obstacle,” she said.

“This would be beneficial for pedestrians, but perhaps problematic for following drivers if their view of the crossing is occluded so they don’t expect the lead car to slow down.

“Motorists who are familiar with the crossing would probably no longer slow down for it – a problem if pedestrians have an increased expectations of motorists slowing down.”

Dr Hatfield said other dangers could also arise if the crossing became a tourist attraction because overcrowding would increase pedestrian risk.

Similar ideas, like removing road markings, have been trialled overseas and have seen vehicle speeds reduced because drivers don’t know how fast they should be going.

“When it presents a hazard to you as a driver then you tend to slow down because you’re unsure, however that is for an experienced driver, for a novice driver it may not necessarily work like that so we have to be cautious about introducing such novel idea,” Prof. Grzebieta said.

Prof. Grzebieta said research had been carried out to find the pedestrian crossings that were most effective at preventing pedestrian injuries.

“The ones with light where it stops the traffic, they’re the most effective, they’re the ones that really reduce the fatalities and serious injuries,” Prof. Grzebieta said.

“We shouldn’t just be applying these novel ideas without the proper evaluation”.