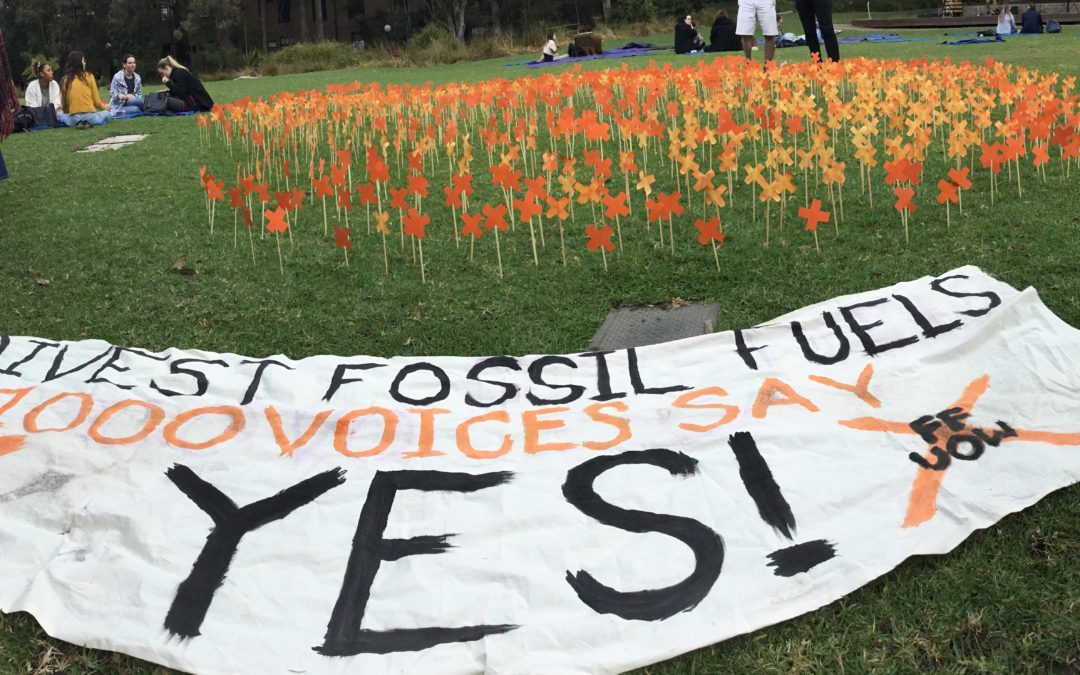 Fossil Free UOW has stepped up its campaign to convince the University of Wollongong (UOW) to divest from fossil fuels.

A protest today delivered a 1000-signature petition to the office of Vice-Chancellor Prof. Paul Wellings.

The protest, which happened under security supervision, included a march from the McKinnon Lawn to the UOW Administration Building.

The petition requested the University of Wollongong;

Co-organiser Maneesha Todd said the event was about visualising the opinions of the university community.

“I think today is also mostly about demonstrating the really strong community support for divestment including students, staff, alumni, academic and other community members,” she said.

The protest was held after the unveiling of a public art installation that included thousands of Xs driven into the McKinnon Lawn to represent community support for divestment.

In the wake of individual campaigns by environment group 350.org, seven Australian universities have divested from Fossil Fuels

The UOW petition targeted fossil fuel contribution to climate change, and the financial and ethical risk these companies pose.

Co-organiser Sara Munnelly said while there were over 1000 signatures on the petition, many more students had been curious about the cause.

“People are just kind of intrigued, I’ve had a few people come up and just be like ‘What’s this?’ she said.

“In terms of in a whole, the campaign has had varied responses.”

It is understood the university is aware of the events, and has communicated with Fossil Free UOW.

“We appreciate that it is a difficult position for the uni to be in because UOW does have strong links to coal, in particular, we have an annual coal conference that we host here every year,” Ms Todd said.

The university is yet to respond to the delivery of the petition.