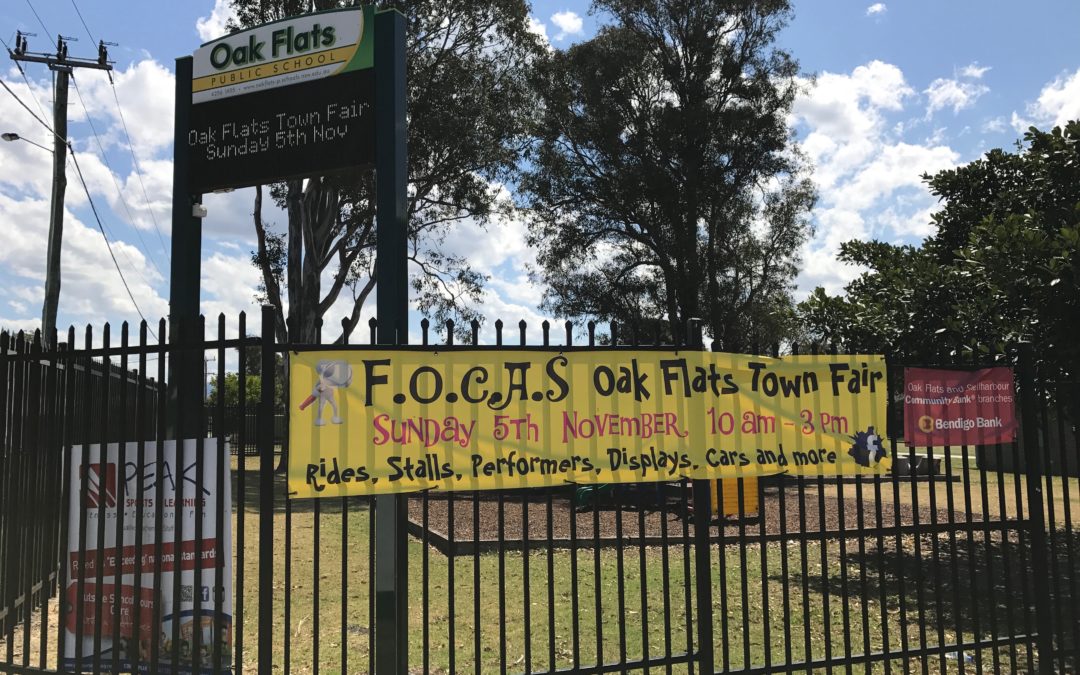 Oak Flats residents claim their town has been ignored by local and state governments in favour of the Shellcove Marina and the Shellharbour Hub.

Oak Flats 2017 ‘For Our Community And Schools’ (FOCAS) Street Fair chairperson Jennifer Butler said Oak Flats has been “underfunded and forgotten for years”, and she claimed funding had instead gone to new developments in surrounding suburbs.

“The focus is always on these brand new places and new developments that towns like Oak Flats get forgotten or overlooked, which is why FOCAS will aim to help bring funding back to Oak Flats,” Ms Butler said.

FOCAS Street Fair will be held on Sunday, 5 November, for the first time in 18 years. Local schools will receive the majority of profits from the day.

“Oak Flats High School and Oak Flats Public School are two of the most underfunded schools in the state, with little to no improvements in years. They are crying out for funding and for people to contribute,” Ms Butler said.

Parliamentary Secretary for Education and the Illawarra Gareth Ward said school funding was based on needs.

“One of the great things about NSW is that because of Gonski, schools are funded according to the needs of their students and the teaching resources they require,” MP Gareth Ward said.

“We have a large target to get interactive white boards in every classroom as they are very beneficial to classroom learning, yet we cannot achieve this with our funds at the moment,” Ms Phipps said.

“The local schools around here are always looking for more funds, so we are lucky we have the businesses, community, P&C and the FOCAS committee working very hard to raise money for us.”

“Oak Flats is a town where we look after our own, so by revitalising the town fair we are aiming at bringing the community together to support our future generations with the equipment they need in classrooms,” Ms Butler said.

“We see a lot of schools and local people run community events and fetes like this, and it is a terrific way to raise funds,” Mr Ward said.

Ms Butler, who has lived in Oak Flats for 45 years, was excited for the future of the town.

“Recently there has been a lot of new, young families moving in which means there are a lot more young kids attending the local schools, who will be the future of our town,” she said.

“Therefore the focus needs to be on the schools to get the right equipment to teach these kids the skills they need for their future careers.

“We started FOCAS because we felt council had forgotten us, so we screamed and cried to get council on board to help bring resources back to Oak Flats. When this didn’t happen, we knew we had to help the kids at these schools achieve what was needed, so FOCAS was born.”

What you will see at FOCAS Oak Flats Street Fair 2017

Oak Flats’ residents will hold a street fair on Sunday, 5 November, to help raise funds for the town of Oak Flats and local schools, called ‘For Our Community And Schools’ (FOCAS). The day will include performances by the iDance Performing Arts Studios troupe, a car and bike display, carnival rides, market stalls and music.

We caught up with Kellie Maguire from iDance and FOCAS coordinator Brett Wilkinson to talk about what we can expect to see at the street fair.

Want to know more about Oak Flats? Here is an Infographic about the town.

“We started FOCAS because we felt council had forgotten us," Jenny Butler said. Join us on 5 Nov to raise funds! #OakFlats #Socialj @UOWTV pic.twitter.com/6YacDLoaLp