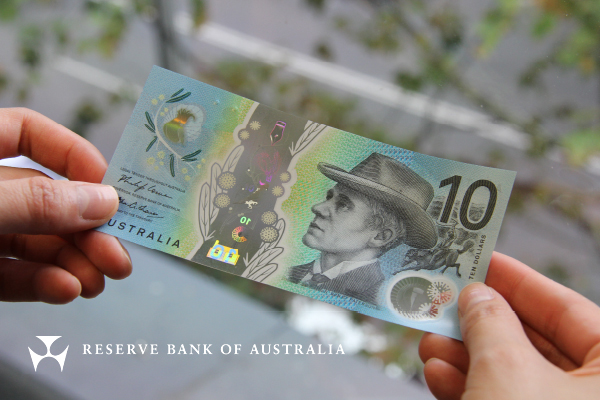 The Reserve Bank of Australia has released the new $10 note, and it has won support of parts of the disability community.

The new note includes tactile features which have been designed to assist people who are blind or have low vision to quickly and easily recognise what note they are holding. The vision-impaired community of Australia has welcomed the new note and has labelled it a step in the right direction to support the estimated 384,000 people in Australia who are blind or have low vision.

“[The Reserve Bank of Australia] are doing a good job creating a more inclusive society by giving those that are blind, or have trouble seeing, the tools they need to use cash more comfortably,” Illawarra vision-impaired Community Support Leader Jarrod Lowe said.

Vision Australia’s lead policy advisor Bruce Maguire said it has been difficult for those who are blind or with low vision to quickly and accurately tell the difference between the notes.

“What the tactile feature is doing is it’s giving us, those who are blind or with low vision, for the first time ever in Australia the ability to distinguish quickly and accurately what notes we’ve got,” lead policy advisor Bruce Maguire said.

However, the blind and vision-impaired community has raised concern about the longevity of the note, and whether it will retain its usefulness.

“What we don’t know yet is how the feature will stand up to continues use after the note has been in circulation for a couple of years, for example, is the tactile feature going to be discernible by touch,” Mr Maguire said.

Mr Maguire said the note, which is very similar to the Canadian currency, will be useful after years of circulation due to the tactile feature being embedded into the note as it is created.

The updated $5 note was released last year, the new $50 note is expected to enter circulation next year, and revamped remaining denominations will follow over coming years.