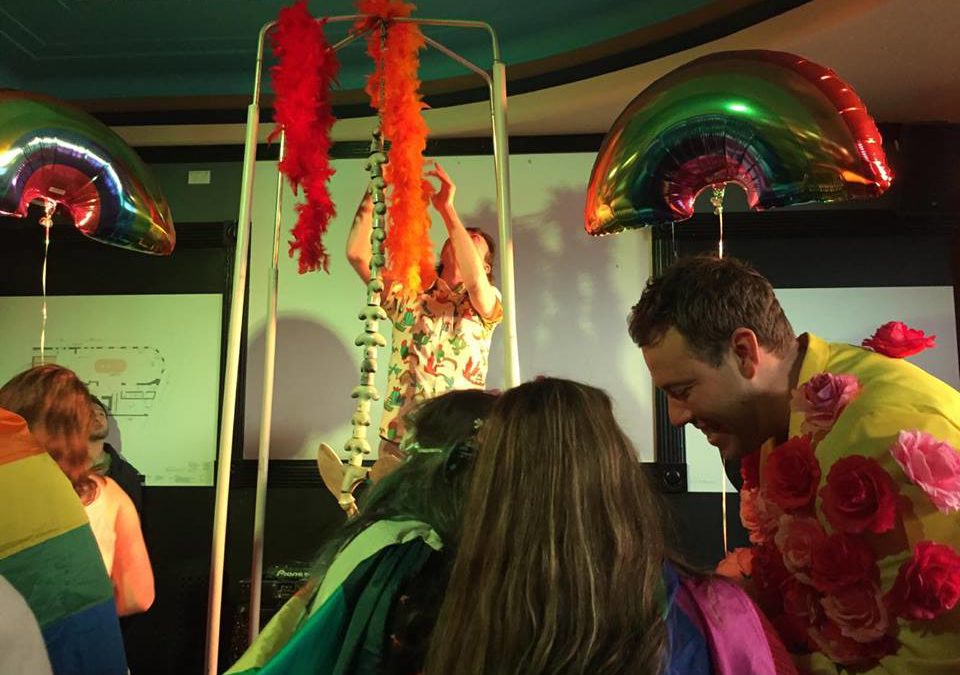 In the face of the controversial postal vote for same-sex marriage in Australia, LGBTQ groups came together to celebrate the creation of a giant spine, built as a gift for Prime Minister Malcolm Turnbull.

Held at the iconic gay venue, the Imperial Hotel in Erskineville, supporters took photos with the giant spine before waving it off for delivery to Parliament House.

The project was a year in the making and was the brainchild of James Breko from DIY Rainbow, who purchased SendTurnbullASpine.com eight months ago.

“For me comedy and humour is so important, especially when it comes to taking credibility away. We are combatting ridiculousness with more ridiculousness,” Mr Breko said.

The day also marked the 13th anniversary of the Howard government amending the Marriage Act to define it as being exclusively between a man and a woman.

Mr Breko is one of the many Australians disappointed with the $122 million postal vote on same-sex marriage.

“I think it’s a real shame in 2017 that this is what our leaders think is appropriate behaviour,” he said.

Through the gofundme page, Mr Breko aimed to raise $700 to go towards the creation of the spine, as well as paying for petrol to deliver it to Canberra. So far, he has more than doubled the financial goal with $1,210 donated.

The spine was created by Reverse Garbage Marrickville, and is made out of recycled products.

“The pelvis is made from the top of a toilet and the vertebrate are door handles so we say to Turnbull; ‘Open a Door’,“ Mr Breko said.

Among other visitors to the event was LGBTQ+ ally Cello Mahon, who travelled from Wollongong to show her support.

“When I heard about this event I just needed to come,” Ms Mahon said.

“The postal vote is a really outdated move from the government and I think this is a great event to publicise that.”

Ballot papers will be sent to every enrolled Australian from September 12, and are to be returned by 7 November. The result of the postal vote will be known by 25 November.