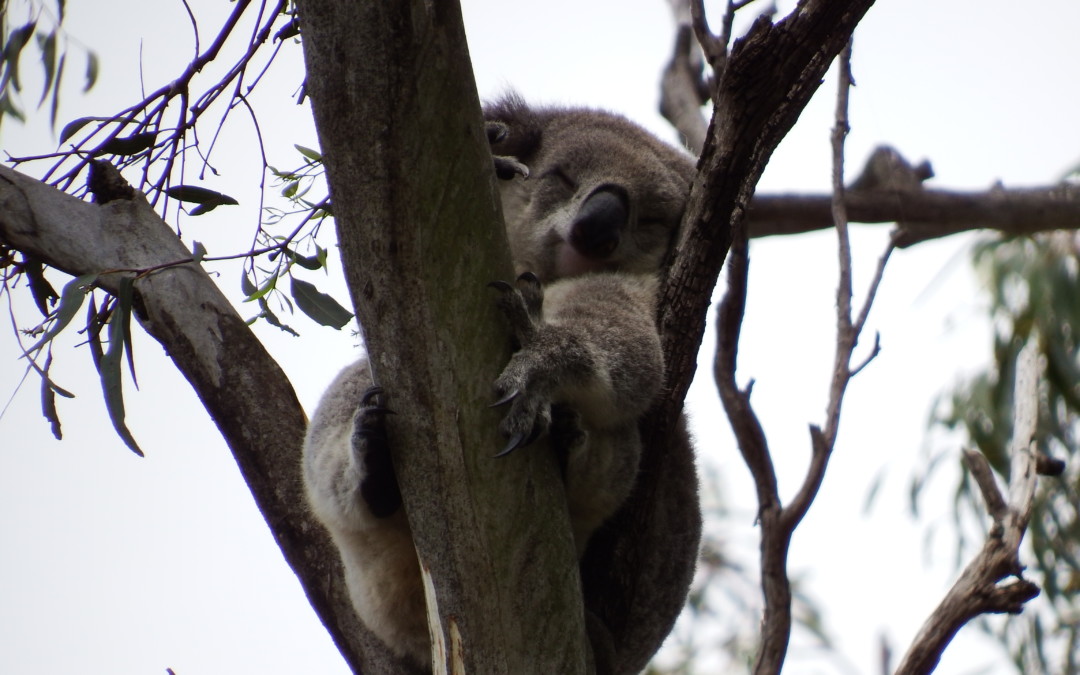 Koalas have climbed back onto the community agenda, the ‘re-discovered’ population sparking a tagging and tracking program and an outpouring of local support.

Listed as vulnerable in NSW, the unexpected revelation represents a major step forward in the conservation of one of Australia’s most iconic animals.

“The Wollondilly Koala Hotline was set up in February 2015 – since then there has been 44 reported sightings of koalas across the Shire, which is pretty amazing,” Mr Stirling said.

“The council commissioned a survey and after analysing 58 different sites within the Shire, the results showed over 22% displayed the presence of koalas, so that really put Wollondilly on the map.”

By Caroline Marschner: This koala is peacefully sedated while having his condition recorded and tracking collar attached

The tracking program, which began last month, is part of the ‘Saving Our Species’ campaign run by the Office of Environment and Heritage, with hopes to better understand koala health and distribution state-wide.

Mr Stirling noted Campbelltown was the only population free of chlamydia, a disease that affects the eyes and urinary tracts of koalas.

While chlamydia doesn’t seem to be an issue in Wollondilly, Mr Stirling warned the species still face significant threats from land clearing and traffic.

“The problem for koalas in Appin is that their population is expanding, and to move into new territory they need to cross Appin Road, Broughton Gorge and Picton Road, which is a treacherous journey,” Mr Stirling said.

The Wollondilly program is also supported by Conservation Volunteers Australia, who aid in data collection and are currently restoring koala habitat along the Bargo River.

At a recent Illawarra Koala Workshop, Project Officer Renae Hockey said she was excited by the swell in community support and interest in the issue.

“I think [the program] is a really good thing. Because the community is involved in the surveying process it really helps to make change on a grassroots level,” Ms Hockey said.

“By helping volunteers know what to look for in the bush like scats and claw marks, those people can then go on and contribute to data collection themselves.”

By Caroline Marschner: The tracking collars are designed to fall off after six months

The recent events have also inspired the youth of the area; Alex Whitnall and her younger sister Bethany were among those attending the Koala Workshop.

“I came along because I would like to learn more about koalas,” Ms Whitnall said.

“After a school project I became intrigued – I find it devastating that the species is endangered.”

Residents are encouraged to report sightings on the Koala Hotline 4677 1100, or contact WIRES for injured animals.