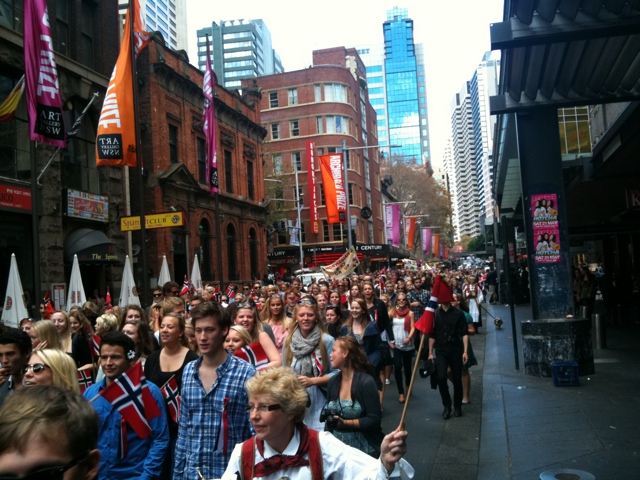 Each year thousands of Norwegians travel to Sydney to celebrate their national day, and the people from Wollongong are no exception. This years celebration saw about 30 Scandinavian students come together with the Norwegian student association, ANSA for short, for a champagne breakfast, and a sing along to the national anthem.

The Sydney celebration gets a police escort through the streets from Hyde Park down to Circular Quay for a traditional parade.

The 17th of May 2017 marks the 203rd celebration of the Norwegian constitutional laws, and the day is widely celebrated across the nation with massive parades, cakes, speeches and for the older audiences a champagne breakfast. Even though the Oslo celebrations would include a greeting to the royal family from the place in front of the castles, the Norwegian population in Australia needs to make a party themselves to make a proper 17th of May celebration, or Norway day as it is named down under.

UOWTV spoke to Norwegian students, Julie Eugenia Braend and Marie Svendsen Aase, as well as the leader of the Wollongong branch of ANSA, Alexander Kristensen who said the day has so far lived up to it’s reputation.