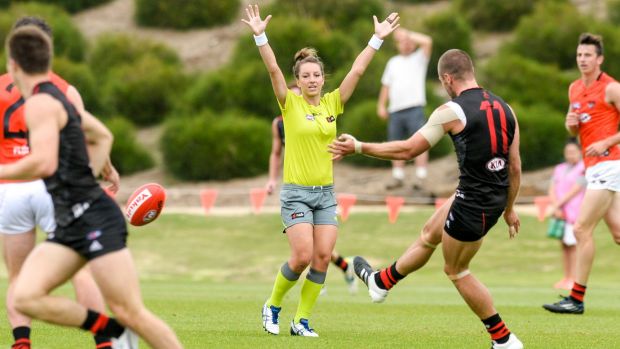 AFL has made history this week with an announcement celebrating the role of women in football.
Eleni Glouftsis will make her debut as the first female field umpire in Sunday’s AFL game between Essendon and West Coast.

The 25-year-old PE teacher at St. Bernard’s College in Melbourne first started umpiring in 2008 with the North Eastern Metro Junior Football Association in Adelaide, before stepping up to the South Australian National Football league, umpiring her first senior match in 2013. In 2016, she became the first female lead umpire to take charge of a senior AFL match at any level.

Glouftsis hopes her debut will open doors for other young girls who may consider AFL and in particular umpiring as a career path.

“There were no female AFL umpires to look up to when I started. I had one or two other females at my local level but it was sparse in terms of females around the place,” she said.

The announcement comes just weeks after the inaugural season of the AFL Women’s League ended. The competition saw women play AFL professionally at a national level for the first time.

“I umpired for two years at both junior and senior levels and then had to stop because us girls weren’t allowed to play with the boys at a national level after the age of 14,“ she said.

“Thankfully that has changed and now there is a women’s league.”

O’Donoghul said Glouftsis’ success means big things for women in league and particular those who wish to take it as a serious career path, although there is still a long way to go.

“She’s the first one to do it, no one really thought it was a possibility until now and with the Women’s league starting this year, it really is the year for women in Aussie footy,” she said.

Wollongong Saints player Rachel Jones has been playing for just over a year and said she has seen a huge increase in female players since the Women’s League became official in February.

“We’ve doubled in players since the announcement, we’ll have enough to have two teams competing next year,” she said.

Despite being a year of success for women’s AFL, Jones said the women’s league still faces backlash in the media and throughout the men’s league.

“We share our training oval with one of the men’s clubs and they don’t give us the same access, if they need the oval we are the ones to have to train elsewhere,” she said.