The Simpson’s reaction to 100 days of President Donald Trump 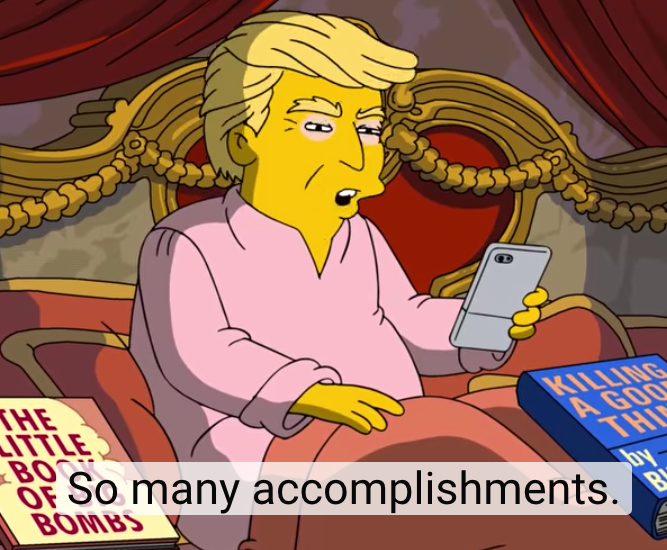 The creator of America’s most popular family, Matt Groening, well known for his social and political commentary, is at it again with a review of President Donald Trump’s first 100 days in office.

The minute and a half video is jam packed with references to the President’s questionable decisions and various tensions within The White House.

As if the ominous thunder and lightning that surrounds the White House is not foreshadowing enough, we travel through a window to see Sean Spencer hanging from the ceiling with a note pinned to his chest, ‘I quit’ and Kellyanne Conway standing beside him. More bothered by the expectation of replacing the deceased Spencer than his actual death, Conway runs screaming ‘I am not replacing him’.

The internal struggle doesn’t end there. Up the staircase, Steve Bannon and Jared Kushner are throttling each-other’s throats and stressing about crinkling their suits.

The introduction to President Trump is exactly how you would imagine it, him commending his first hundred days and acknowledging his “many accomplishments”:

Propped up in a lavish bed with a long haired dog acting as his hair, Trump dismisses the task of reading a new bill that “lowers taxes for only republicans” by suggesting that Fox News could read it and decide whether or not it is worth signing.

Ivanka Trump also makes an appearance as Ruth Bader Ginsburg’s replacement as the “new Supreme Court Justice, presented as a business opportunity to sell her clothing. A social commentary on confusion surrounding Ivanka’s role in The White House, keeping with the question posed by Chancellor Angela Merkel, asking if she was there to represent her father, her business or the American people.

Transported from the TV, we see Marge and Homer on their infamous lounge, reflecting on Trump’s presidency with concerns and criticism.

The 100 day summary reassures America that they are 6.8% of the way through Trump’s 4 year presidency.

ttention Groening pays when commenting on society and current politics.

We of course know that this is not the first time the Simpsons have satirised a political figure, nor will it be the last, especially considering the small clip mocking President Trump’s University, replacing it with equally money and power hungry Montgomery Burns’ institute, ‘Burns University’.

The video decided to not include commentary on Trump’s controversies regarding women’s reproductive rights, alternative facts, exaggerated inauguration crowd numbers,  the International Women’s Rally against Trump, a similar rally run by the world’s scientists and the impending war between North Korea and America.