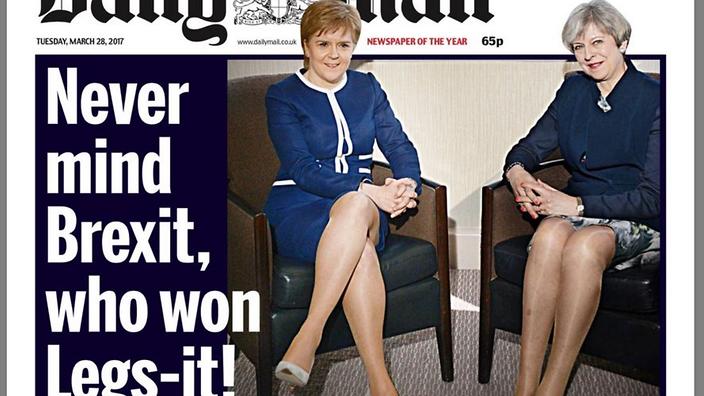 A Daily Mail headline comparing the legs of two UK politicians has prompted a sexism debate in the media.

Tuesday’s edition of the newspaper caused an uproar over its ‘Who won Legs-it’ front-page headline. Politicians have been among Twitter users drawing attention to the headlines troublesome undertones.

The 1950s called and asked for their headline back.#everydaysexism https://t.co/s1W1XfhrhN

I'd like to think in an alternative brexit-verse far far away this is what everyone's getting cross over #dailymail pic.twitter.com/QlOg5Y6a0p

Author, Sarah Vine, defended her Daily Mail article on LBC radio saying, “It’s a tabloid newspaper, that’s what we do,

“We provide a mixture of high and low and that is why the Daily Mail is such a fun and interesting newspaper to read.”

Vine went on to claim “Compared to some of the misogynistic things that have been written in the liberal press, this is very mild.”

Vine has since written a justification in the Daily Mail, “Can’t they see what I see: the two most powerful women in Britain today having a tacit face-off via their wardrobe choices? Isn’t it just a little bit amusing?”

“As for the legs, how could I not mention them? The legs are the first things that strike you when you look at that photograph. It’s not a loaded comment, or a sneer: it’s a simple fact.”

She also drew attention to an extract from an article about her and her husband Michael Gove.

“When it comes to sexism, bigotry or any of the other sins I have been accused of, I’ve got a long way to go to beat comparing another woman to a dead pig” Vine wrote.

The topic of inherent sexism in society has been buzzing recently, with Big Bang Theory star Mayim Bialik slamming sexist language in a video last week. In it, Bialik encourages viewers to stop calling women “girls.”

“When we use words to describe adult women that are typically used to describe children, it changes the way we view women, even unconsciously, so that we don’t equate them with adult men.”