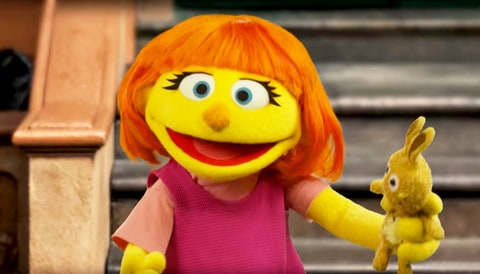 Long-running US children’s television show Sesame Street has introduced a new character who has autism. Julia has been added to the show to help address stigma associated with autism.

The little girl with red hair has been in Sesame Street’s online digital storybook series since 2015, but she will make her television debut in April.

The creators of the show hope Julia will help children better understand autism, and provide a character autistic children can identify with.

“I can remember watching the show as a child and seeing Linda, who was deaf and having conversations with others on the street and teaching kids on the show American Sign,” Dr McMahon-Coleman said.

In Julia’s first appearance, she experiences a ‘glitch’ while meeting Big Bird. When the two characters are introduced, Julia is hesitant to shake Big Bird’s hand. He’s sad and worried Julia doesn’t like him, but Elmo explains Julia has autism, so she “does things a little differently.”

“These examples show how the kids are having fun with her but not at her expense and promotes the acceptance of other kids who respond in atypical ways,” Dr McMahon-Coleman said.

The first episode focuses on Julia’s reluctance to meet and engage with new people, her sensitivity to loud noises, and her excitability during games.

University of Wollongong alumni Sam Gee has Asperger’s Syndrome. He said said the Sesame Street character would benefit children by representing autism and other disabilities as part of human diversity.

“Autism and Asperger’s are just exaggerated states of the norm, it is a normal thing, and it’s great to see that Sesame Street is being inclusive to these group,” he said.

The creators of the show said they wanted to demonstrate certain behaviours through Julia that children who have autism might exhibit. The aim was to create a character that wouldn’t turn her into a standard model for everyone with the disorder.

“Every child with the disorder has a different experience. The creators have done a great job in creating a character that will help to educate kids and even adults in understanding these disabilities,” Mr Gee said.