All groan up: the quarter life crisis 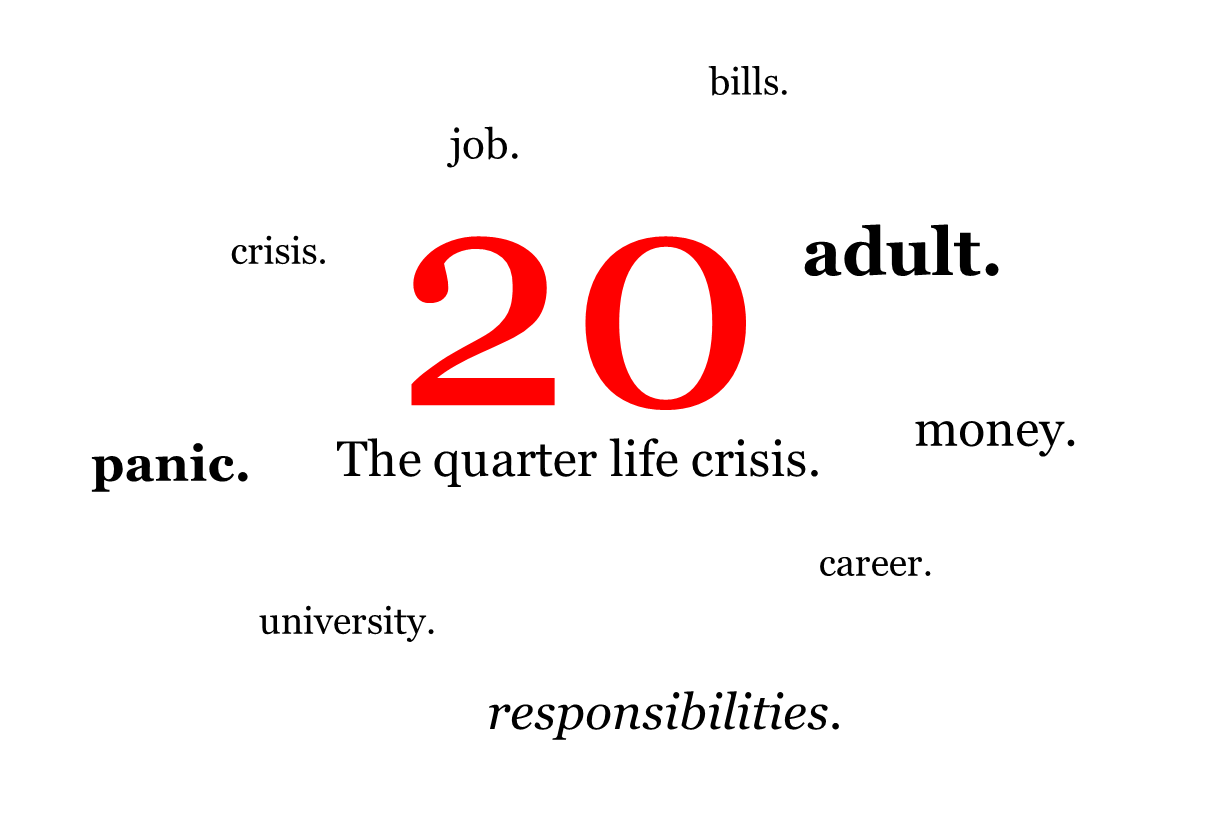 We’re promised our 20s are some of the best years of our lives – an exciting period of transformation and adventure before mortgages and marriage. The world is our oyster, or so they say.

But with soaring house prices, rising unemployment, and job uncertainty, many young people are struggling to cope with the transition into the ’real world’.

Anxiety, insecurity and disappointment can make the 20s a turbulent time for many people; psychologists are calling it a ‘quarter-life’ crisis.

Research from the International Journal of Behavioral Development found 39 per cent of men and 49 per cent of women reported feeling in crisis in their 20s, with tertiary-educated professionals most likely to suffer.

Damien Barr, author of Get it Together: Surviving Your Quarter Life Crisis, said a quarter-life crisis could be described as the “feeling you should be having, doing or being more. Like … there’s a better party, job, flat, partner out there, and you’re the only person who can’t find it.”

An online survey of more than 1000 young people conducted by advertising website Gumtree found 86 per cent of respondents feared failure in their 20s and felt under pressure to succeed in their relationships, finances and jobs before hitting 30.

Stephanie Thompson-Raizenberg, 23, recently graduated with a bachelors degree in Political Science and said life after university hadn’t been the time of steady progression she had expected.

“I worry that I will never get a proper job in my field and that I will disappoint my family. I don’t want to be doing odd jobs for the rest of my life. I’m worried that I’ll never afford to be able to raise a family and that really worries me,” she said.

So what is behind this collective sense of distress? From an unstable economy to a dwindling job market, twenty-something’s of today face real economic and social challenges.

The 2014–15 Budget estimated the average student leaves university with debts exceeding $17,500. Graduate unemployment in Australia is at its highest since 1995 and has more than doubled since 2008. Latest figures released from Graduate Careers Australia show 32 per cent of bachelor degree graduates are unable to find full-time employment four months after graduating.

It’s’s not only graduate unemployment that is on the rise. Statistics from online real estate listing site Domain show the average Sydney house price costs more than $850,000, that’s a staggering 30 times as much as the average house price in 1975.

For Stephanie, the overwhelming pressure to succeed and live up to her parent’s expectations is daunting.

“My parents were already married by my age and had their own home.,” she said.

“I’m 23, still live at home and I don’t have a full time job- they are all things that I thought I would have by my age, and it really makes me question what I am doing with my life.”

Speaking to news.com.au, Clinical Psychologist Matthew Bambling from the University of Queensland said unrealistic expectations were a key problem .

“What I see from undergraduates quite a bit is the expectations of what they’ll be able to do once they leave university is enormous,” Dr Bambling said.

“Many of them think they’ll walk straight into management jobs and be paid an enormous amount of money. That gap between expectation and reality often caused young people great pain.”.

Dubbed the “social media generation” twenty-something’s of today are bombarded with images of young people achieving great things. Studies conducted by AnxietyUK showed the rise of social media sites such as Facebook and Instagram, have contributed to growing anxiety and insecurity among young people.

“For our generation it’s worse than that of our parents because of social media. Social media is so constant and you find yourself continuously comparing yourself to the success of others,” Stephanie said.

“If you’re having a shit time and you scroll through Facebook and it’s all “oh I just got engaged” or “I just bought my own home”, it just makes you feel worse.

If you happen to find yourself in the midst of a quarter-life crisis fear not, it may be a good thing.

Managing Director and Principal Counsellor from Illawarra-based eCareers Academy Brian Horan said the quarter life crisis can be a positive experience and an important time for self-reflection, growth and developing resilience.

“When times are tough, or situations aren’t working out as you had anticipated, this allows you to tap into your inner resources and discover that you have more potential than you realised,” he said.

Mr Horan advised young people struggling with the difficult transition into early adulthood to take time out and map out a clear vision and direction for where they want their life to go.

“Find out the activities you enjoy, places you like to hang out, people you wish to be with, experiences in which you want to participate, and make time for these activities,” he said.

“By doing this you will not feel pressured or as though you’re missing out, because you’ll be doing what recharges you, makes you feel content, and ultimately fulfilled.”

Mr Horan advised anxious twenty-something’s struggling to find their place in the world to be patient.