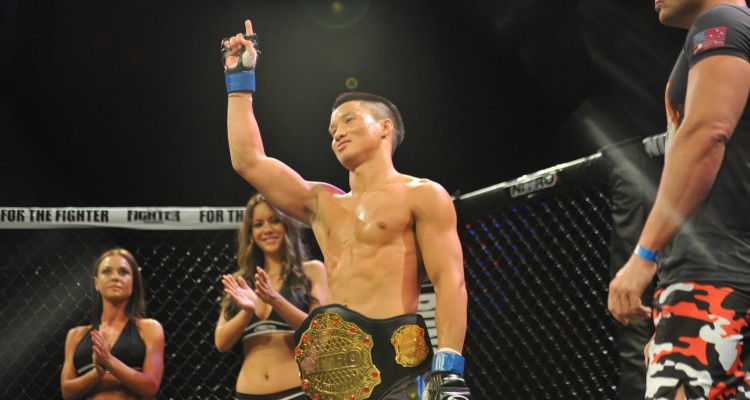 Computer technician-turned UFC fighter, Ben Nguyen will look to make his debut in Melbourne later this year after using social media to secure a position in UFC 193.

The crowd favourite, known as ‘Ben 10’, reached internet stardom in March after knocking out ‘tattooed bully’ Julz the Jackal. The video of his triumph reached all corners of the Internet, and he soon became the people’s champion on social networking sites like Reddit.

The 26-year-old fighter who, despite only making his Octagon debut a fortnight ago in Adelaide, attracted almost 50 per cent of voting when The Daily Telegraph recently ran an online poll asking: Which Aussie fighter would you most like to see at UFC 193 in Melbourne?

The ‘Geek Squad’ worker used his technological prowess to advertise this poll, appealing to Reddits 170 million monthly users for help as well as Facebook and twitter.

Vote for me to be on UFC Melbourne! Follow the link and scroll down about half way to vote. ROCK THE VOTE! http://t.co/t5EovPLyrj

“It’s funny because I’ve been going on that Reddit site for eight years,” he said.

“And never once did I become some sort of Internet favourite.

“I can’t believe the support I’m getting. It’s incredible” says Nguyen in an interview with the daily telegraph.

Nyugen’s reaction to this exposure is also seen on his Reddit post where he thanked the millions of people who had watched, shared and commented on his video.

“I woke up today thinking this whole thing would be blown over by now. I couldn’t have been any more wrong! The video itself has over 50 million combined views, I’ve gained about 2k more followers on my social media,” he said.

“I’m so grateful to be part of the Reddit community and be the hero of the Internet for the past 24 hours! Mind=blown.”