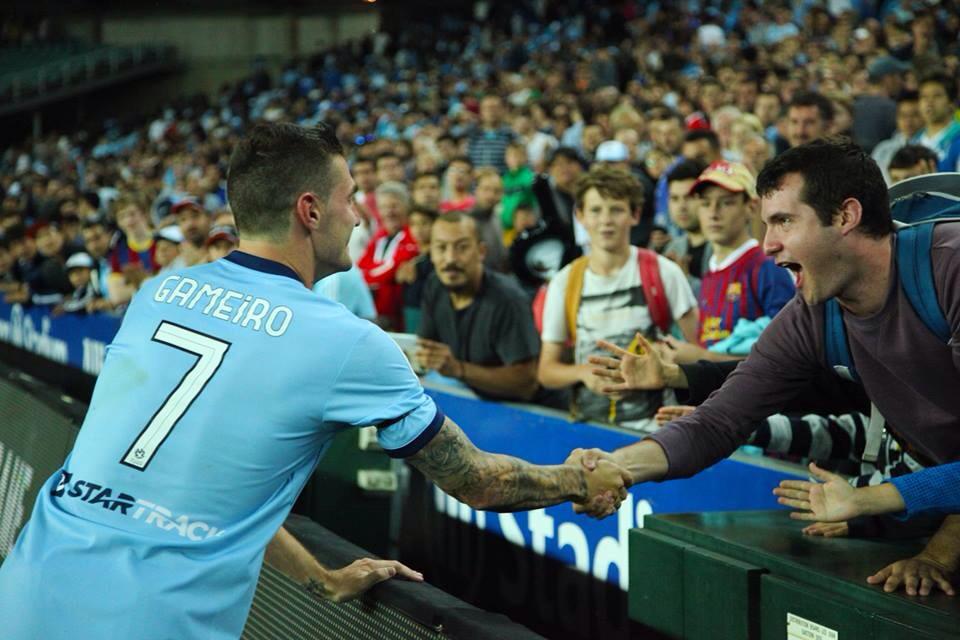 Players and fans alike are gearing up for the 10th Hyundai A-League Grand Final to be contested between Sydney FC and Melbourne Victory at AAMI Park tomorrow.

The decider is expected to be the most watched club football match in Australian history with two of the league’s foundation clubs battling it out for championship glory.

The Victory and the Sky Blues finished first and second respectively on the ladder and have had a fierce rivalry since the A-League’s inception in 2005.

Graham Arnold has transformed the Sydney FC squad since his arrival, with the Sky Blues remaining undefeated away from home this season, while Kevin Muscat has thrived in his first full season as manager, leading the Victory to the Premiers Plate.

Sydney FC striker Corey Gameiro had a blistering start to the season before rupturing his Anterior Cruciate Ligament, which ruled him out for the remainder of the year. Gameiro had scored 12 goals in pre-season for the Sky Blues and two goals in the first five A-League games before being injured.

UOWTV reporter Matt Gencevski sat down with 22-year-old to chat about his season, the A-League and his team’s grand final preparations.

One on one with Corey Gameiro

MATT GENCEVSKI: Do you feel this is the biggest Grand Final yet? Considering it is the 10-year anniversary of the A-league and the two teams involved are the two of the originals?

COREY GAMEIRO: Yes, I would like to think the league has come a long way in ten years. The standard of football has improved and so have the players we’re attracting to the league… yeah I’d like to say this is one of, if not, the biggest final.

MATT: You spent a lot of time in the youth grades at Fulham in England, how beneficial has this been in your career?

COREY: I’d say massively. Most of the players have played in the NSW division and then got to their A-league club, so my path was a little bit different. Being at a professional club like Fulham, who were in the Barclays Premier League at the time and being able to watch and train with players like Bobby Zamora and Dimitar Berbatov, which is obviously a lot better than the Sydney United players the younger kids get to play with here. It has helped me technically as well. I went over on loan to a club called Eindhoven in Holland for four months. It definitely helped me more.

MATT: You mentioned Dimitar Berbatov and Bobby Zamora there. Round one this season, a 1-1 draw with Melbourne City and there were two goal scorers that game. Corey Gameiro and David Villa. How did that feel?

COREY: Yeah it was strange… It definitely raised a lot of eyebrows because David Villa was supposed to headline the game and the next day, the articles were ‘Gameiro scores stunner’. It was a good moment for me and it was such an honour to play on the pitch with such a high profile name. After the game I was the first one over to him to shake his hand and thank him for coming to the A-league because ‘it’s people like you’ who are only going to make it bigger and better for the next generation. It was good to play against him but it was a shame we were at the other end of the field but I still kept a close eye on him to see what he does and to practice a couple of things at training.

MATT: A week later, you played in the Sydney derby against Western Sydney. What was the feeling scoring in what is regarded as the most emotional game in the A-league?

COREY: It’s a big derby… The fans, the family and the people on the outside won’t understand the passion in those games because we don’t want to lose and will do anything to win. It showed on the night, you could see no player wanted to lose and no player on their team wanted to lose either. The passion and the emotion is extremely high… The expectations are high as well. There are a lot of things that go through your head and you also try and stay cool and collected so you don’t do anything stupid and let the team down. It’s a big game… and to score, get an assist, and get man of the match… it is an honour. There is a lot of pressure on the big names to score so if I can pop up with a goal from the shadows and help my team to win, I’m more than happy to do that.

MATT: You had an injury early on in the season that cut it very short. How close were you to playing this weekend?

COREY: I’m back into training with the team now but I’m not doing any contact stuff. Unfortunately, I won’t be fit for the final but I would like to think if it was in a month’s time, I’d be able to play. It’s one of those things… It’s never a good time to happen so I’m not going to wish it happened a month earlier so I could play. I was away representing and captaining the Australia under 23’s when it happened. Doing it in such an honourable moment… something I will remember for the rest of my life. It has also helped me in mental strength… you have to experience and go through something like this before you can add it to your personality and your character.

MATT: It’s a great achievement for Sydney FC to make the final this year. What has been different compared to last year?

COREY: The main thing for me this season, and all of the boys if you were to ask them, is the team chemistry we have and the desire to work for each other. You can’t bring that… Everyone has got to want to do it. When Arnie (Graham Arnold) came on board with us, he was massive on it. You can see with the success he had with mariners – with no disrespect to any Mariners’ players, but with the team they had, and the technical ability they didn’t have – they had the character, the determination, the desire, the teamwork and it just worked. It got them to the final and won them the league. Arnie wanted to bring that to Sydney FC, and in my opinion, Sydney FC is the biggest, if not the biggest club in the country with a lot of talented footballers. If we can add those things I mentioned to a team with such ability, then I don’t see why we can’t be the best team in the country. This season we have proven we are, or one of the best. When it’s your mate next to you – you don’t want to let them down and when you need help, they’ll be there doing the exact same for you. We worked on that in pre-season and a few things had to be worked on. Some people had to be let go of because they didn’t jump on board with it. Look at the success we have had. I would have to say the team chemistry; team harmony and the togetherness create a family environment where we are all one big family. You work in the office – you are part of the club, you are a part of our success. Everyone has a part to play but we’re in it together, and that’s massive for any club.

MATT: Do you feel this family harmony has helped? Because I have never seen a statistic like this… You were undefeated away all season.

COREY: Yeah we were undefeated away for the whole season, which is the first time this has happened in the A-league. It’s an extraordinary achievement. People won’t understand unless they look back at the game and see where we have played, the teams we have had to play and the kind of scenarios we had to deal with. It was difficult, but this is desire I was talking about. When we go away, we are in a hotel, and we stay in focus. Arnie soon adapted that for home games. Instead of staying at your own house, everyone was at a hotel in Sydney – the night before a game. Because our away form was so good, he wanted to implement that to our home form.

MATT: One last question. Grand final this Sunday, what do players preparations for the week before the grand final?

COREY: I can tell you from an insider’s point of view, we are focusing on about 20% on what Victory can do and what they like to do. But 80% is on us. If we can play the way we want to play, and we stick to our structure that got us there, we are confident we can win. We don’t want to go there and worry too much about what they can do. We want to go there and make them worry about what we can do. Like I said, if we play the style of football we have played all season, and stick to our patterns we have created, I am confident we can go down there and get a win.