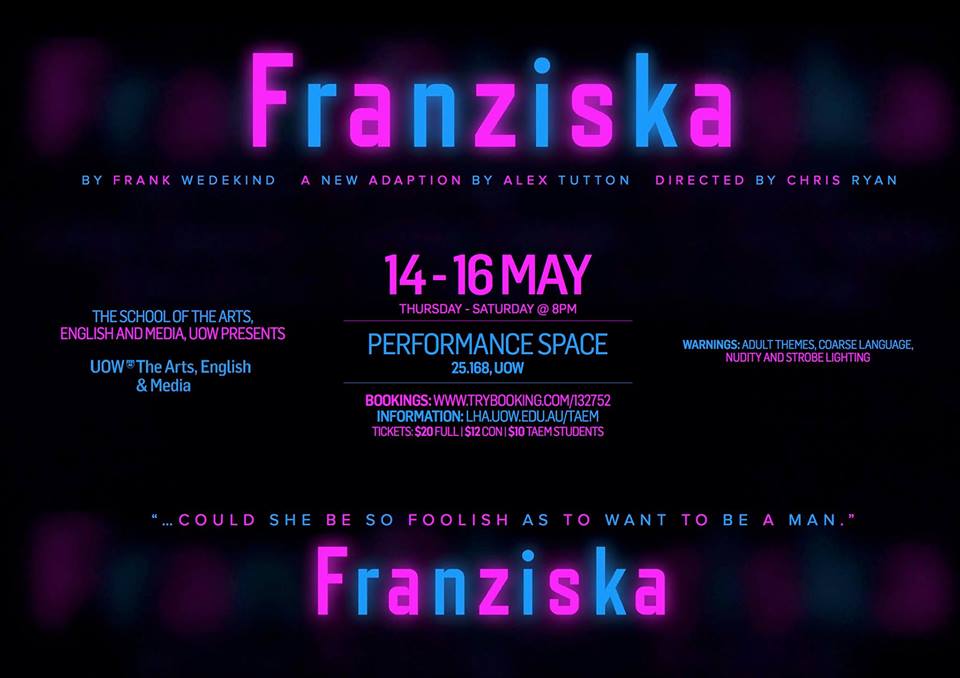 Gender is the main theme of Franziska, a new play to be performed tonight by second year Performance students at the University of Wollongong. The play is an hilarious adaption of one of the works of the early 20th Century playwright Frank Wedekind that explores the issue of gender in a modern light.

“The whole [theme] is gender, and I think Frank Wedekind back in the 1900s was very boundary pushing at the time,” said performer Tia Best.

Franziska is the tale of an 18-year-old woman of the same name who makes a deal with a devil-like character who offers to turn her into a famous singer. Her only request is she also be turned into a man for a few years.

“The story follows her journey as a man and all the quirky characters she meets. By the end of it she comes out as this extremely well cultured woman,” said actor Steffanni Gardener.

This is the second time the play’s director Chris Ryan and writer and adaptor Alex Tutton have joined forces to adapt a Wedekind work. The first was last year, when they adapted Spring Awakening, turning it into ‘Teenage Wildlife’.

“Alex wrote this hilarious play and it’s more modern and for today’s society rather than the early 1900s,” Best said.

“There are a lot of the original ideas because when we read the original script it was really apparent that [Wedekind] was ahead of his time. So a lot of the text that Alex has adapted has the same essence of that post dramatic theme, but she just adapted it for a contemporary audience, which is pretty clever,” cast member Carlee Heise said.

The play is written and performed in a post-modern way, with plenty of moments that ‘break the forth wall’ and interact with the audience.

The cast said they rely heavily on the good will and participation of the audience to ensure the show is a success.

Overall, the play is a comedy, and the actors agree people should come if they want “a good, hearty chuckle.”

You can grab tickets at the door or book online at www.trybooking.com/132752. It runs at the Creative Arts Building Performance Space (Bld 25.168) on Thursday, Friday and Saturday night, from 8pm.