Live Below the Line and educate yourself 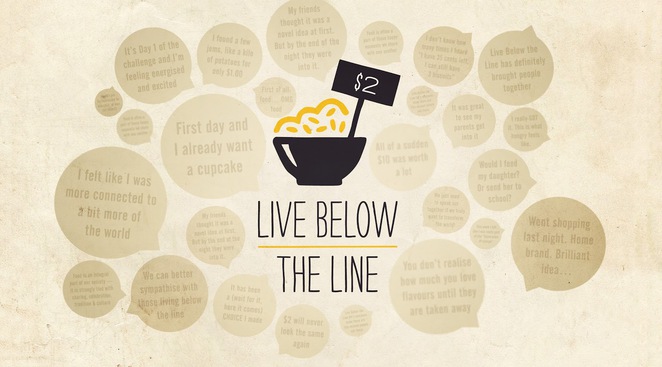 Eating on $2 a day, your shopping trolley would feature an anti-gourmet selection of ingredients: oats, pasta, carrots, rice, chickpeas, and maybe potatoes – if your grocer has a good deal going.

Your diet for five days will be made of 65 per cent carbohydrates – not exactly the ideal meal plan. However, this is what people doing the Oaktree Foundation‘s Live Below The Line challenge have faced this week.

Participant, Professor Karen Charlton of the University of Wollongong’s School of Medicine, said the campaign was a great opportunity to educate her students about food insecurity.

“We concentrate a lot on the external factors and environmental factors … all those background factors that impact on people’s ability to have a healthy diet,” she said.

“By actually putting themselves in the position of somebody that is food insecure, that cannot afford a basic healthy diet, it just brings home, I think, the difficulties that people have.”

It is the second time Prof. Charlton has taken part in the Live Below The Line challenge.

Professor Charlton in her office, working alongside her scarce lunch for the day.

The challenge is designed to encourage people to sponsor participants and donate. All proceeds go to educational programs in Cambodia, Timor-Leste and Papua New Guinea.

“It’s about uplifting poverty, rather than just giving a hand out,” Prof. Charlton said. “I think the strategy is good.”

It is the second time Prof. Charlton has taken part in the Live Below The Line challenge. The first time around she was determined to get all of her students on board as part of their studies.

She said it wasn’t right to force people to participate, so now she asks students volunteer to take part.

This year, six of her students have joined her in the campaign, and the team aims to raise $3,000.

Student, Grace Nell has already raised more than her goal of $500. She said the campaign was an important contribution to her education.

“When I graduate, I think I would definitely like to work in foreign aid in terms of poverty and other issues as well,” she said.

Ms Nell volunteered at an orphanage in Cambodia in January and witnessed poor living standards.

“Just seeing the level of poverty, in the flesh, it’s just something I’m very passionate about,” she said.

“After that experience, it was very special to me.”

Prof. Charlton wrote an article for The Conversation about the campaign last year. She said she was criticised by some who said the Live Below the Line campaign was nothing like the daily struggles on people in thuird-world countries.

“We’re not simulating the real thing, but we are trying our hardest,” she said. “The campaign is good because it does raise a certain amount of money.”

This week, Prof. Charlton managed to put aside her commitment to nutrition and dietetics for a worthy cause.

“What we will be doing is certainly not in line with Australian Dietary Guidelines but the cause is a most worthy one,” she told UOW Alumni earlier in the week.

Professor Charlton’s groceries for her Live Below The Line diet in 2014.
Image from her article on The Conversation.

Pasta with cheap sauce, and some porridge Plenty of carbs, not so many nutrients.

Donations can be made up to a month following the five-day challenge.

Last year, Prof. Karen Charlton wrote for The Conversation about her first experience of attempting to live below the poverty line. Read the article HERE.