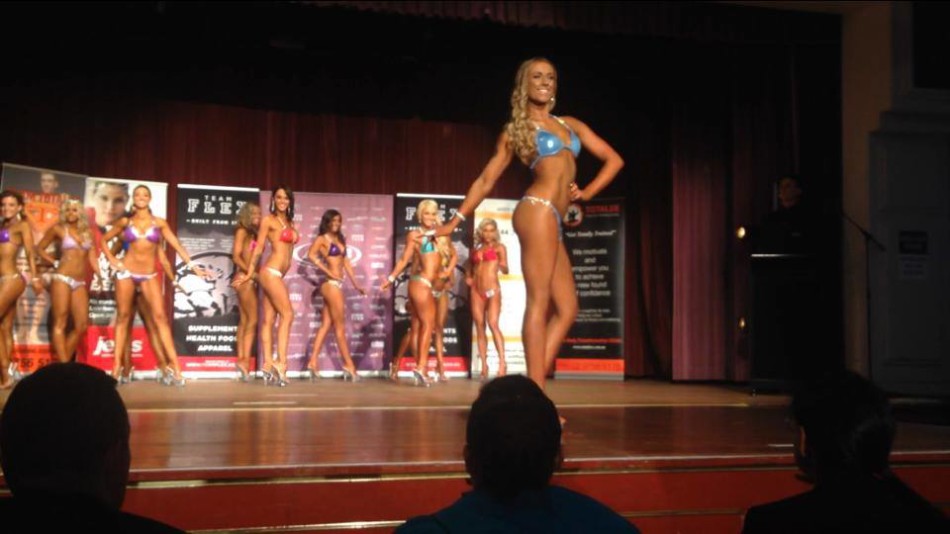 The competition forms one of the many regional heats across Australia in what is known as the Australasian Natural Bodybuilding Federation. The event is described as the love-child of a beauty queen pageant and a Schwarzenegger-esque bodybuilding competition. With competition categories ranging from bodybuilding to swimsuit modeling, the event caters for a wide range of body shapes and fitness levels.

Shannon Hancock competed as a fitness model for the first time in last weekend’s event. Dressed in a small blue bikini and sky-high heels, she walked and posed across the stage after months of training for the event.

“Usually, athletes start training 16 weeks prior to their event,” she said.

“From the very start you are following a strict plan for training and dieting. It’s a whole new lifestyle and I was interested in exploring what it means to truly be fit.”

The fitness model competitors are scored according to their body shape and condition, as well as on their presentation and costuming. In the style of most beauty pageants, contestants compete in several rounds including a bikini round and sportswear round.

In the months leading up to last weekend’s competition, Ms Hancock trained two-hour workout sessions, six days a week. Her now taut, muscular figure is in recovery mode before she begins training for her next competition.

“It’s definitely changed my perception of myself. I’ve always wanted to get super fit but this has shown me just how much my body can do and how much further I can go,” she said.

The Australasian Natural Bodybuilding Federation (ANB) has held bodybuilding competitions for over two decades now. The organisation is affiliated with the Australian Sports Anti-Doping Authority (ASADA) and all competitors are tested for drugs such as banned steroids and peptides.

“Our competitors are tested and treated the same as any other athlete in the sporting world,” said International Head Judge Philip Lehner.

“Steroids not only affect the performance of contestants but also change the shape and style of their muscle building … in a competition like this it is important that they [the competitors] look a certain way.”

“People are finding it more achieveable to get that toned, muscular figure without the extreme dieting and hard work that comes along with bodybuilding.”

The Sydney Natural Physique Championships will be held in Bossley Park in two weeks time.