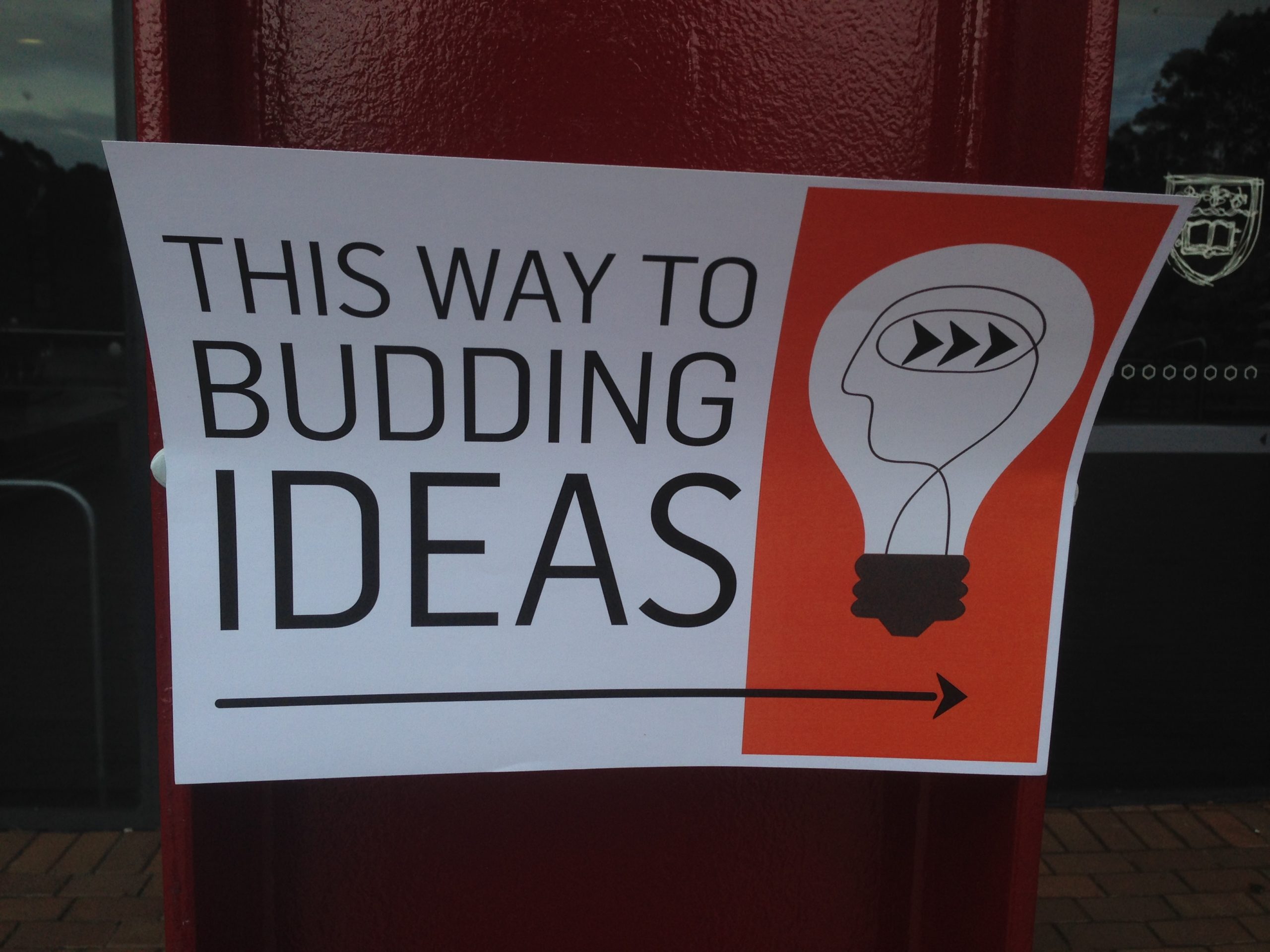 7:10– “We do have a number of truly remarkable researchers.”

7:09 – Paul Wellings closes the Budding Ideas event. He says the event tries to showcase the range of research and the passionate researchers at UOW.

6:57 – The next question is also for Peter Kelly, about whether smoking is present across the mental health spectrum. People living with schizophrenia and bipolar disorder smoke at higher rates than others.

6:54 – A question for Siobhan about Radio Doc Review. She explains that while the reviews are in text, audio is often embedded. When asked whether audio would be the ideal medium to present the reviews, she says that the flexibility of allowing both scholars and others to write in their preferred forms is desirable.

6:46 – First question is about the process of reprogramming the skin cells to stem cells, which Lezanne explains initially takes two weeks, but does take longer to ensure they are stem cells.

6:45 – It’s now time for questions, make sure to use the #buddingideas hashtag on Twitter.

6:42 – An Alzheimer’s patient’s skin cells can be reprogrammed back into stem cells, and researchers can study the neurons and conduct analysis. This  allows researchers to test drugs on the cells of patients, and identify patient-specific treatment, or transplant neurons.

6:41 – She says it is still uncertain what initial changes in the brain lead to Alzheimer’s.

6:34 – Lezanne Ooi is the final presenter. She is talking about how skin cells are in the process of changing medical research.

6:32 – Peter is currently conducting research that works with drug and alcohol addicts, and is also working with indigenous populations.

6:28 – People with a severe mental health problems are living 15-20 years less than the general population.

6:27 – However, while the general population is down to approximately 15% of smokes, 50% of people with severe mental health problems are smokers.

6:24 – “Smoking is one of the biggest issues” in regards to people with a mental illness.

6:22 – Next is Peter Kelly, who is talking about improving the health of people living with mental illnesses.

6:21 – Shahriar closes by saying that superconductor wind turbines based off shore in Australia are “the only economically viable option.”

6:19 – Off-shore conventional models would cost $300 billion, compared to the MgB2 Superconductor, which would cost $60 billion.

6:18 – Conventional generators weigh almost 3 times as much as the MgB2 Superconductor-based equivalent.

6:14 – His work is with superconductors. But how can superconductors be used in wind turbines? They can improve existing designs by removing gear boxes that often require repairs and maintenance.

6:12 – “Wind energy contributes only 1.6% to the worldwide energy consumption.”

6:11 – Shahriar says it’s an important time to find out the most effective and secure energy sources.

6:09 – Shahriar Hossain is the next speaker. His presentation is about powering the next generation with wind turbines.

6:08 – Peter says Randomised Encouragement Design has many applications, from use in universities, to schools, and the workplace.

6:07 – Their findings are positive, and the study continues until the end of this session.

6:06 – The researched involved encouraging half of PASS participants to attend at least 5 sessions to have the chance to win a prize, with participants who attend 8 or more receiving a second entry.

6:04 – Peter is talking about PASS, and how he is currently in the process of evaluating its effectiveness.

6:02 – Randomised Encouragement Design differs from other study designs by not taking away the opportunity to actually participate in a program away from anyone, and instead simply encourage some participants while not encouraging others.

6:01 – Peter argues that Randomised Encouragement Design should be used more often to evaluate programs, such as PASS (Peer Assisted Study Sessions) at UOW.

5:54 – She closes her presentation by saying she hopes audio continues “informing by stealth, and engaging with broad audiences.”

5:50 – “We can use audio to impart certain knowledge more effectively.”

5:44 – Siobhan is talking about the ABC 360 Documentary Will Kate Survive Kate

5:41 – Professor Aidan Sims is the MC for Budding Ideas. You can join in on the conversation on Twitter with the #buddingideas hashtag.

5:21 – Find out what UOW researchers are working on at Budding Ideas. Follow the live blog here, and watch live at bit.ly/1D81ESP