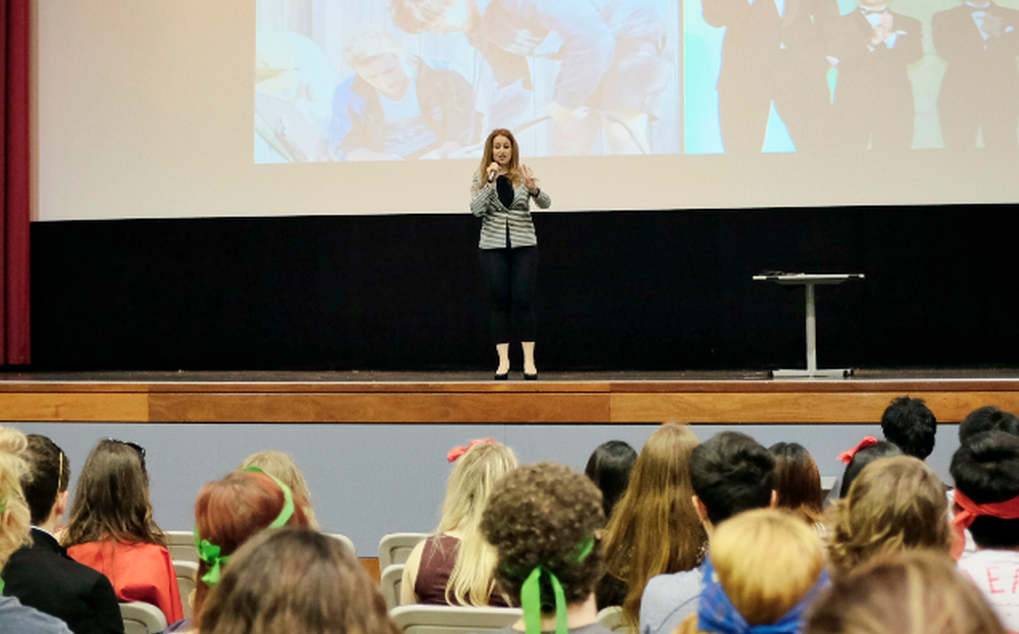 To join in the conversation if you are at the conference, share your experience by tweeting @ASLAleadership #S4S14 #S4SChallenge

Cas and Jonesy rose to fame after becoming the first people to kayak from Australia to New Zealand in 2007. This is part two of their epic adventure, walking from the edge of Antarctica to the South Pole without assistance in 2012. Cas joins us to explain what it is like to spend 89 days in the harshest environment on earth.

“We ate, slept and pulled the ridiculously heavy sleds for eight hours a day. We just hit reset every day. That was a primary objective.”

Cas gave Jonesy a slab of bacon he had saved for TWO weeks as a christmas present and decorated the inside of the tent with balloons as a surprise – let’s just say Jonesy was absolutely beside himself ecstatic!

“When you’ve been pushing that hard for that long in a place like Antarctica, our bodies started to die with us. The soles of our feet started to fall off. The infections that spread across our face had made eating a chore.”

“Our bodies were two walking corpses. The only things keeping us going were our minds saying just take one. more. step.”

They would dedicate 300, 100 or even 5 steps to someone back home as motivation to keep moving.

After 2275 kilometres, their Norwegian competitor Aleksander Gasse was waiting three kilometres short of the finish line to end the journey together in a remarkable act of friendship.

“Seeing Aleksander was the most incredible display of sportsmanship, kindness, humility… exactly what adventure is all about. Doing things together is so much more powerful – we fed off each other’s energy”

“This guy has ice running through his veins. Jonesy and I were starting to feel like the Jamaican bob sled team” – Upon discovery they would be competing with a Norwegian explorer setting off on the same mission a day before them.

“Our lungs were burning through the cold air”

Antarctica is supposed to be the driest continent on earth, it doesn’t snow in Antarctica. However Cas and Jonesy got almost 1 metre of snow dumped on them, so progress was painfully slow.

“I was in so much pain, we were staring right down the barrel of failure. But what was hurting more was the feeling of failure.”

In the last 100 years, no one had ever pulled off the unsupported journey from Antarctica to the South Pole.

“We came up with about five pages of questions covering a range of topics we had no idea about and zero answers. Hypothermia, frostbite… We thought if we could come up with answers, there would be no reason why we just couldn’t go out there and do it.”

“Our big mac deficit was 8 big macs… So the only option was to bulk up before we left, which was quite fun”

For climate training – Flew to the north east coast of Canada where is was -42 degrees celsius, “Our nostrils turned to ice instantly. These were temperatures we could never had fathomed.”

Challenges on board the Kayak – “We were being tossed around in the middle of the Tasman Sea at night by two sharks, circling the kayak”

“I’ll never forget going to bed that night and having one centimetre of kayak shell between our heads and those sharks. I was the most bizarrely intimate night of our lives.”

On suggesting the Antarctic trip while still on the kayak expedition – “Jonesy pulled out his paddle and tried to hit me with it. He just wanted to get out of the Kayak and have some beers, but I was planning our next adventure… The seed was planted.”

“I’M GOING INSANE HERE, I CAN’T HANDLE THIS. I JUST CAN’T KEEP DEALING WITH THE PAIN ON THE TRAIL. I JUST CAN’T MOVE. WHAT IS THIS PLACE”

Cas said as teenagers, he and Jonesy were pretty sad and confused blokes and went on to do day jobs there weren’t motivated by. “We were living these lives that we weren’t passionate about. But on the weekends we would absolutely come alive. Mountaineering trips all over the globe.”

DAY ONE KEYNOTE SPEAKER #2: JoAnna Ferrari is a transgender woman who has consulted/coached in over 140 industries, become a published author and trained sales teams in 5 countries. She talks to us about her journey and how she dealt with the internal conflict that sent her spiralling into destructive mode.

“I lost everything… It was looking really bleak. But the smile never left my face because I was really in synch with who I am. Now my outside matched my inside”.

Ferrari says that to become a great leader, you have to stop worrying about if you can hurt people and what their expectations are.

“You have to think of who you want to be. Follow your own transition.”

Most people change their lives to fit everyone else around them. Ferrari says she went into denial after initial experimentation and went back into ‘John mode’, reaching 122kg and trying to please those around her.

While contemplating the transition, Ferrari wrote down what she could lose – her wife, her three children, the possibility of being loved anymore, her business… her family.

“I made the decision that if the people around me didn’t accept me, they didn’t deserve to be in my life. I wasn’t going to die unhappy.”

Ferrari says that for a transgender person, the suicide rate is eight times higher, unemployment is sky-high through the roof, and she knows terrible stories of people getting murdered by their family members.

She chased success in an attempt to find fulfilment… Dancer, actor, model, degrees in Biology, Nutrition & Nursing, married for 21 years, father of 3 children.

“There is a big difference between being successful and being happy. If you win a million dollars, you will not be happy”

“It felt completely awkward for me to wake up in this other body… probably just as weird as it was for my body to wake up with me inside of it”.

After her first initial makeover she felt an overwhelming peace. “You don’t feel a sense of doom and gloom in the world”.

“I want to share with you how to remain who you are, while you’re becoming someone else”.

“One the hardest times of my life was going through puberty, because I was like no – I really don’t want to go in that direction!”

“The first person I was involved covering up the feelings that I had been feeling, and being as good of a boy as I could be. I was being shaped by what society said was correct.”

Ferrari said to become aware of what is happening to your in life, as it makes you make better decisions going forward. She has over 50 journals from the first half of her life.

DAY ONE AFTERNOON SESSION: Ian Olver, CEO of Cancer Council Australia is here talking about how leadership is being the ‘champion of the vision’.

What do you consider to be one of the greatest achievements in the role?

“The implementation of Bowel Cancer screening will now save 30-40 Australian lives per week.”

What is your biggest regret?

“Treading on people’s visions that are a driving force in who they are. Repairing the damage after not listening to people properly, not bringing people along with you as you are so keen to drive the show. Distancing and alienating people is a recurrent error.”

Your thoughts on a work-life balance?

“You learn as you go along, when you are passionate about things, you are bound to take it home. It is very easy for it to become all-consuming.”

After 9 years, Olver resigned as CEO of the Cancer Council yesterday, before he made a decade in the role. He explains why:

“A CEO should not stay too long, your energy and your ideas should give way to new energy and ideas”.

He is now moving on to be Director of the Sansom Institute for Health and Research at the University of South Australia.

“You can’t be to enamoured with leadership that you hold onto it at all costs. Leadership is a privilege.”

Olver says it is often acknowledged that the organisation is greater than the individual, but believes it is the individual with passion that drives organisations. KPIs and structure can be a challenge to leadership.

“Leadership is dangerous because it can make you unpopular. The real challenge is ‘adaptive change’, trying to change people’s ingrained habits, beliefs and values; as it makes them feel disloyal and gives them a sense of loss.”

Olver highlights the importance of keeping true to your vision, “Our vision is to control cancer so it’s not a burden on society.”

Olver says, as a leader you don’t have to reinvent the wheel, people have done it before you. Find these people who can inspire you.

“Don’t let the temptations of power or leadership ever get in the way of being nice.”

One of Olver’s earliest projects was creating a clinic in Alice Springs, which he ran for 13 years, to service the needs of surrounding remote communities.

“The aboriginal people believed that if you get breast cancer it is due to a dispute or a falling out, in which you are receiving pay back for. They didn’t understand why they would need chemotherapy or radiotherapy, they thought they needed to just repair their relationship with their aunt”.

Olver says that one of the challenges of leadership is understanding the people you lead.

1.30pm – Be right back, delegates trying their hand at hip-hop, the Italian language, drama and Quidditch! Here is an action shot.

DAY ONE MORNING SESSION: 27-year-old Melissa Abu-Gazaleh (above), CEO of the Top Blokes Foundation is the first keynote speaker for the S4S National Leadership Conference at the University of Wollongong this weekend.

11. 50am Melissa says it’s common for high achievers to burn out, emphasising the need to look after ourselves. Students are now goal setting & SMS-ing their friends so that they held accountable. Melissa talks about the importance of a supportive network of people or mentors.

Melissa is blindfolding six students on stage and getting them to search for lollies. To demonstrate where there is a will, there is a way. Uni students will get involved for food!

ON THE INFLUENCE OF OTHERS

Melissa says she ticks many ‘marginalised’ boxes; being female, young, ethnic, from a regional area, went to a public high school – “Someone once said to me, it’s so inspiring everything that you’re doing, especially because you’re ethnic. I was like, what?”

“I’ve also been told by a friend – ‘maybe it’s time to close down Top Blokes because maybe you need to get married and have kids.’ But what could I possibly do that makes me more passionate and more excited?”

The goal of Top Blokes is to support young men in overcoming challenges & not let challenges defeat them.

“One young man we are working with sleeps with his mum every night in the school car-park.”

“Top Blokes Foundation is a youth lead, aimed at helping young men aged 14 to 28-years-old to ignite their inner ‘top bloke’. We get really awesome young guys under 30 to run the programs… because the boys don’t laugh at my jokes…”