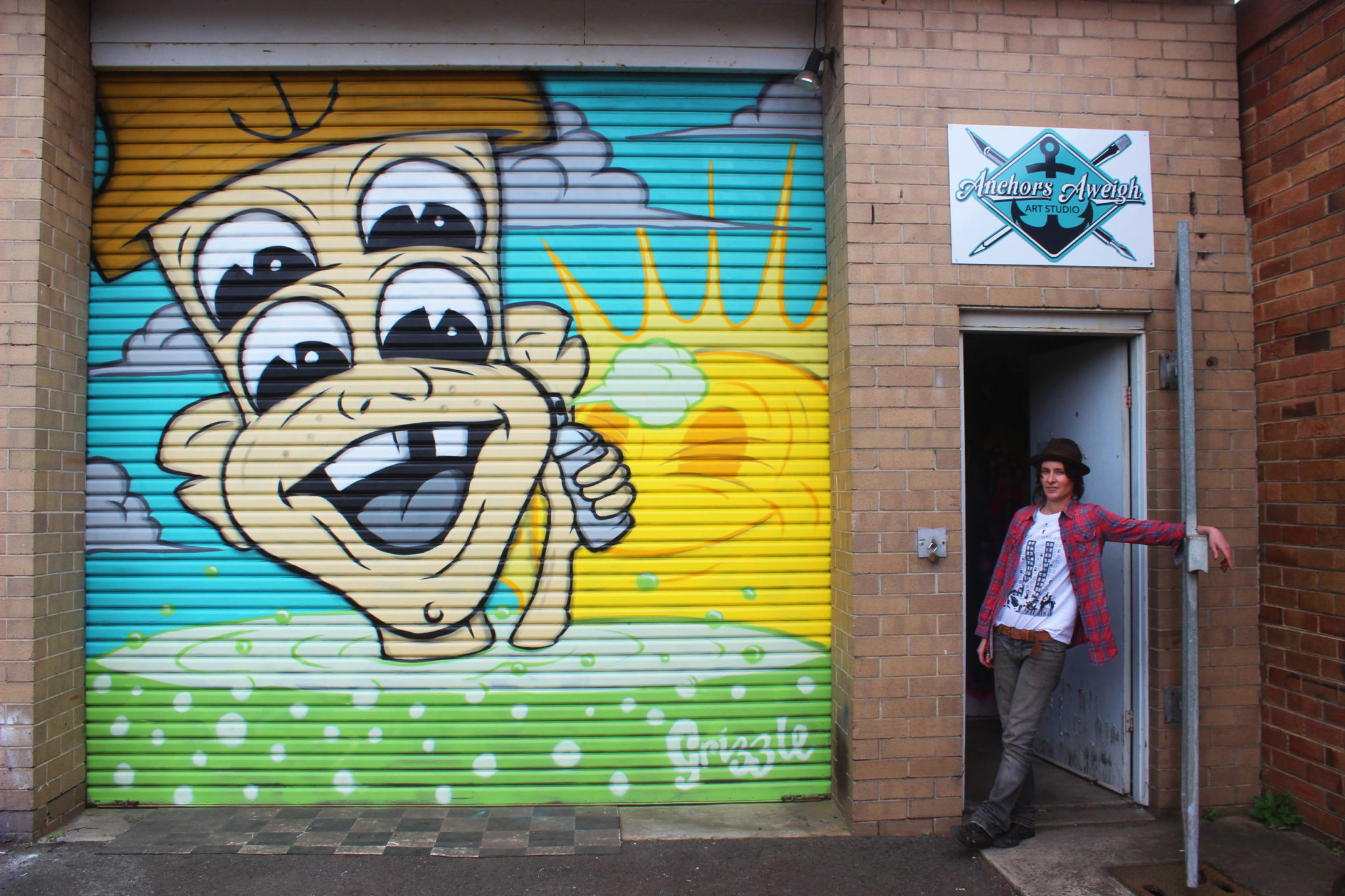 Trina Collins, also known by the pseudonym Poncho Army, is celebrating her first year of business at Anchors Aweigh Art Studio. A dream that she has held for over ten years, the studio resides in a large warehouse in Coniston and offers urban, contemporary and graphic workshops as well as an art supply store and a design house.

The idea for the Anchors Aweigh art workshops began during Trina’s residency at Wollongong City Gallery between 2012 and 2013. While teaching workshops at the gallery, Trina recognised a lack of art classes offered for teenagers in the local area, with most targeting adults or children under ten. Towards the end of her residency, Trina started to realise she would soon need a studio space of her own, and that necessity worked hand in hand with the gap in workshops on offer.

“The sort of artwork I do using aerosols and having screen-printing equipment didn’t really allow me to move into one of the shared studio spaces that were already around, because they’re quite small, shared places and that wasn’t going to suit my style,” she explains. “So I went, you know, there’s this big hole, I need a warehouse, maybe doing workshops could help fund the rent.”

She believes she chose the right time to start the studio, with the residency boosting her local profile as an artist and teacher.  However, forming and running Anchors Aweigh hasn’t been easy.

“Those first six months were terrifying,” Trina admits. “I didn’t have money to market the space, so people just didn’t know it existed. I was literally counting down the months until my lease expired; wanting it to be over because the place was running me into debt.”

After six months of running the studio, business started to pick up, with parents booking their children into classes at the start of the new year, and Trina went from teaching two children per workshop to an average of seven. Eventually adults approached Trina asking about classes for murals or aerosol work, as drawing and traditional forms of art were covered locally while urban art was not. The introduction of graphic design courses at the studio also led to university students signing up, hoping to further their understanding of programs such as Adobe Photoshop and Illustrator.

“I remember doing Design at uni, and we were expected to learn the programs ourselves,” she says. “I ran the first class, and the two uni students who were here said they learnt more in those two hours than in their first year of uni so, it shows we’re doing something right.”

Graduating with a Bachelor of Creative Arts in Graphic Design and New Media from the University of Wollongong in 2003, Trina’s expectations of life after university changed quickly.

“I applied for heaps of jobs, thinking ‘I’ve finished uni, I’m going to get this amazing job’ – you don’t even get an interview,” Trina explains. “No one wants someone who’s straight out of uni. I had to go back to my home town, I grew up down in Berry, I worked for the South Coast Register in Nowra. I didn’t know skills that were something we had to do all the time, and they showed me. I can’t believe something that took five minutes, I wasn’t taught in three years – something that I use every single day. So those are some of the things I’m showing in the graphic design classes, all the things that I learnt in that first year on the job,” she laughs. 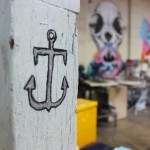 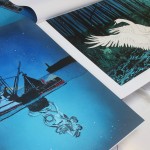 Prints from Trina’s ‘Fight or Flight’ series, made with her own formula of water-based ink that bonds to solvent-based aerosols. 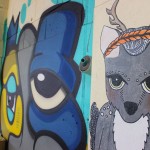 Close-up on work featured on the walls of A.A.A.S, artists included (left to right) are Stacie Sims, Hugo 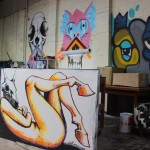 Bottom left, piece by Kaff-eine, top left and middle are collaborative pieces between Apeseven and Bafcat, top right by Hugo. 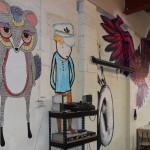 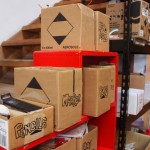 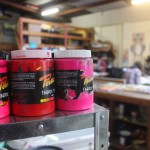 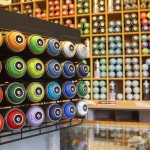 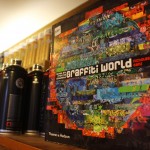 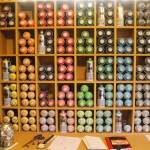 A.A.A.S stocks a large range of Montana products and most items used in the workshops including water-based inks, screen printing supplies, cutting mats, lino tools and accessories, x-acto knives, blades and much more. 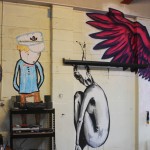 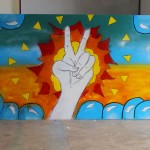 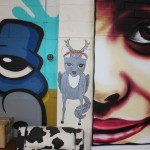 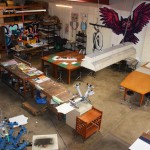 View of Anchors Aweigh from above.

After a year in Nowra, Trina moved to Wollongong to start working at the Illawarra Mercury, and remained there for seven years while continuing to take on freelance work and furthering her knowledge through self-sustained study. Once she started working as a graphic designer full time, Trina looked beyond the computer and started practicing stencil art.

“I wanted to use aerosol, I thought that would be fun, and stencil art allowed me to break down images on the computer and I was comfortable on the computer,” she says.

Eventually Trina started turning her own illustrations into stencils, and once her work progressed to a level of detail unable to be stencilled, she turned to screen-printing for its use of detail. Her love of the colour achieved with aerosol led her to combine aerosol with the layers of illustration in screen printing, and wanting to use water-based screen-printing ink, Trina spent three months of her residency at Wollongong City Gallery creating her own formula of water-based ink that would bond to the solvent-based aerosol.

“I felt like a crazy scientist, I literally did have all these little beakers and jars of different ink formulas made up, seeing which one would work,” she laughs. “I still remember when I got the first good print, because at the time I had 200 failed prints scattered on the floor, and I finally got a good one. It was still a hit and miss process, but the more I went through the remaining nine months that I had, I was getting less misses and more hits.”

Trina’s work resulted in the creation of a thirteen piece linear story series titled ‘Fight or Flight’. With 55 editions of each print, and 715 prints in total, all were hand-printed and hand-coloured stencils, most between 8 and 14 layers with a water-based screen-print over the top.

“I knew what I wanted to do, I had planned that series for a year in advance, and I wasn’t going to let it go, I was sticking to my guns and luckily it worked out,” she says firmly.

Trina’s advice for university students about to graduate is simple, encouraging them to take it one step at a time and stay positive even after failed interviews or rejected resumes.

“I think the best thing to do is have your dreams, but don’t expect to get them straight away,” she says. “If you’re in a position where you can do an internship for 6 months, do that. Don’t let them abuse you, but that training you’ll get, the skills on the job, is as valuable as the three year degree you’ll walk away with.”

While she admits moving back to her hometown after university made her feel slightly “ashamed” at the time, viewing it as a symbolic step backward in her career, she can see now that the decision was worth it.

“In my case it took ten years to get here, and there’s still stuff I’m working on, I always sort of snowball my dream up a bit once you reach a milestone, most people do but just be real about it,” Trina explains. “You have to look at the big picture and do things smart – remember that art, if you want to make it a career, it’s a business just like any other. Don’t rely on grants as an artist. No other business relies on grants, only artists are expected to. It doesn’t set you up to have a profitable business. We’re no different to a mechanic or a hairdresser. You get into it because you love fixing up cars as a kid, we get into art because we love doing art as a kid.”