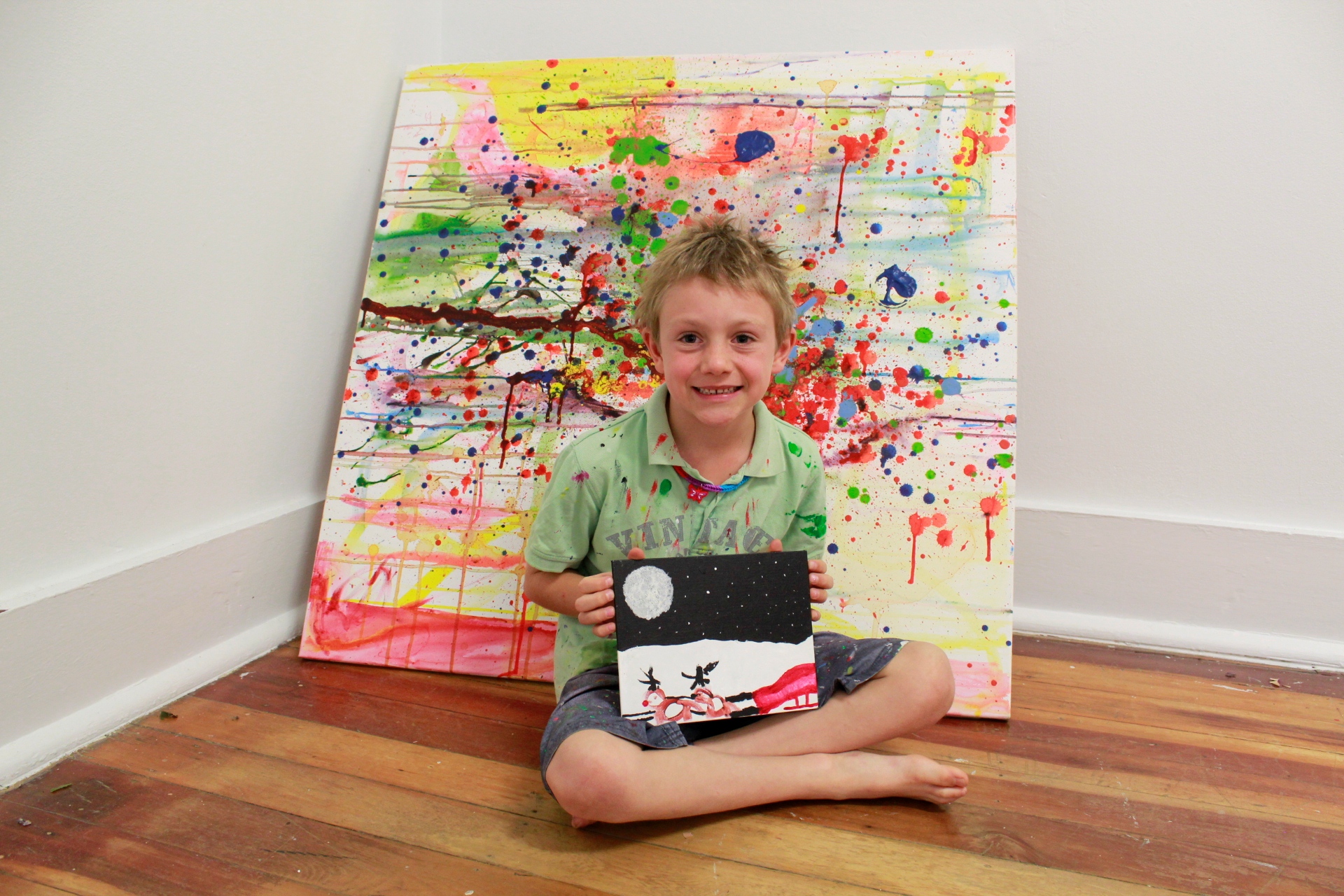 For many artists, their first solo exhibition is an exciting and stressful step, but Towradgi’s Aiden Campbell already has plans for a second show.

The seven-year-old artist will hold his first exhibition at the Now You See Me gallery in Crown St Mall. Named after one of his favourite songs by Cyndi Lauper, the ‘True Colours’ opening night will launch over 25 artworks, and includes live performances and a movie about Aiden.

Dressed in clothes freckled with green, red, white and blue paint, Aiden Campbell is quiet at first, described by his mother Simone as “a koala” as he holds on to her. But within seconds of entering the art store on Crown St he is clearly at home among the aisles. The deep blue floor splattered with fat drops of red, yellow and green paint is reminiscent of some of Aiden’s work, and he rushes over to inspect bright pink portfolio folders and a selection of wooden items. He settles on a small wooden house with a hinged door, money slot, padlock and keys. While he usually prefers canvases, there is already a plan forming for the house.

“I’ll paint it,” Aiden says quietly, “With a brush. And I might put some ink on it.” The suggestion of black ink receives a wrinkled nose and a small shake of the head. “I’ll put colours on it,” he declares.

Aiden’s method for the works in ‘True Colours’ is a technique that he created himself in the backyard of his family home.

“I drop ink on some from my cubby house,” he explains. The technique takes practice, with many attempts missing the canvas until he finally perfected it. “One time I was about to put more paint on but when I turned around the canvas was gone,” he remembers. “And then I tipped over a container of paint.”

After a recent trip to London and Paris spent in art museums and Disneyland, Aiden has returned with an admiration for Jackson Pollock and Picasso, and openly admits to preferring the art in Paris. While a big fan, he hasn’t been heavily influenced and aims to create his own style.

“Sometimes what they do, I’d like to try it,” he says. “But I’m working on one, we’re going to put marbles on it with a plaster… and collected things from Paris and London.”

Now You See Me gallery owner and Aiden’s art teacher, Tegan Russell, believes the exhibition is an important step in his life as an artist.

“It’s very brave – he’s following his feelings and is proud of the fact that his artworks aren’t trying to be something they’re not, they’re just his art,” she explains.

Dropping paint from the window of his cubby house is a new idea of Aiden’s. One of the pieces on display is Aiden’s first work, a Christmas scene with reindeer and a snow-filled night sky.

“He turned his paint brush upside down to start dotting [the falling snow], and we thought ‘Oh!’” Simone remembers, placing the piece carefully on a stand. “He had just started working with Tegan and he started doing that out of nowhere. But this one won’t be for sale.”

Aiden calmly shows how he used the end of his paint brush to make the snow, and explains how he placed a layer of texture before painting the white circle of the moon. While the ‘Santa’ piece is small, Aiden now prefers large canvases.

“I get more space, more room for the paint,” he says, staring around the gallery absentmindedly as his artworks are carefully hung up by Simone and Tegan.

“Every term we pick a new thing for the boys to do, so Aiden wanted to do tap dancing. He did one term and then it wasn’t for him,” Simone says. “But he said he’d really like to do art. So those classes are how we stumbled across it, he started doing work and very early after that we went to Tegan’s art show and he decided he wanted his own.”

According to Aiden, another piece shows “when the rainbow loses its colour”, and was achieved by letting ink slide as he manoeuvred the board. Two framed works were part of a bigger painting that was cut up, as Aiden preferred the visual effect. Another two called ‘Colourful Cats’ are a different style again, drawn first and then painted over. He picks up a large canvas to show how he created some of the pieces, rocking the frame from side to side.

“I put the ink on, and then tilt the canvas to make it run down”, he explains. Aiden declares a piece is done when he doesn’t want to add more ink. “If I turn it this way it’s bigger than me,” he giggles, rotating the canvas until he is hidden from sight.

Another prominent piece in Aiden’s portfolio is ‘Candyland’, with bright candy colours and a story inspired by the film Cloudy with a Chance of Meatballs. However, not all his creations have to include a story; Aiden enjoys finding out the characters and worlds his works inspire in other people.

“When I hand out certificates to other art classes, they all have different ideas of what my paintings are about,” he says eagerly.

While he is excited for people to see his work, he was still “a bit sad” to say goodbye to the pieces on display, as Aiden chose his favourite pieces for ‘True Colours’.

“We helped choose them as well, because it forms a body of work. Those pieces come from the same period of time,” Tegan explains. “Aiden tends to make in series, and these all matched together.”

The experience hasn’t turned him off the idea of exhibitions, as he already has plans for his second show later in the year.

“It’s called ‘Space’!” he proclaims, turning the wooden house in his hands. ““I’m going to get canvases and put drops of ink on it. I do have some [artworks] already, but I’ll have to make a lot more.”

‘True Colours’ will be showing at Now You See Me gallery, located about the Hideaway Café, from 25 August – 5 September. The official opening night is Friday 29 August, 5:30pm – 9:30pm. Money from the cost of entry and sale of exhibition pieces and prints will go toward funding materials and future shows for Aiden. For more information about Aiden Campbell visit the official Facebook page. 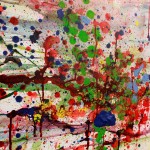 A close up of ‘Planes’ 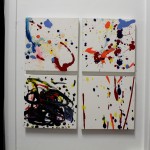 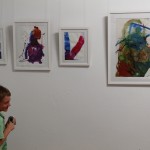 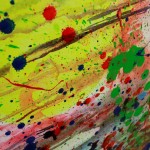 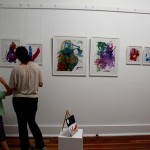 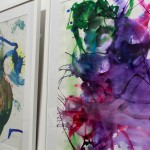 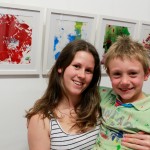 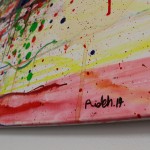 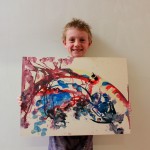 “The rainbow loses its colours” 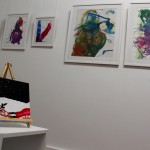 Aiden’s first piece with more of the True Colours exhibition 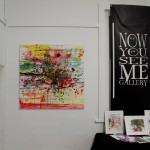 Prints will be for sale throughout the exhibition 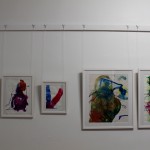 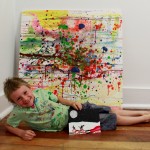 Aiden with his first work and a newer piece called ‘Planes’