Make it to Cairns with cans as currency: Mission accomplished 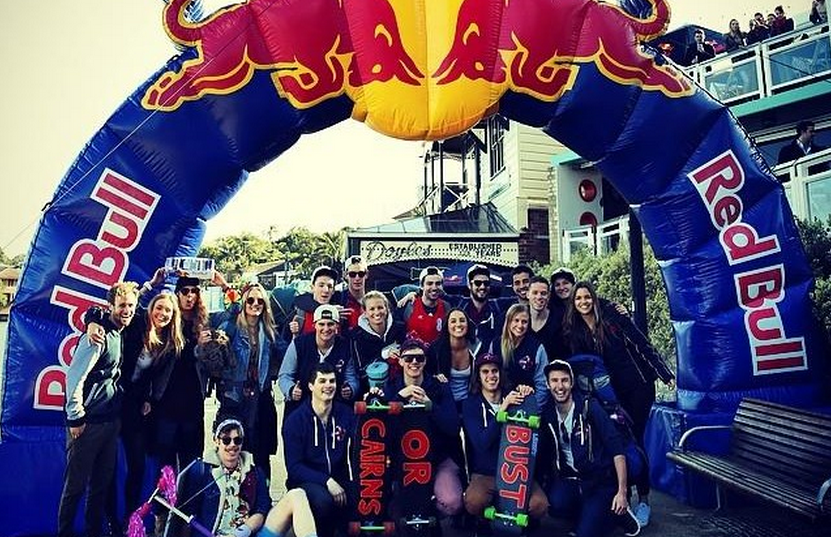 Money doesn’t grow on trees, but it does come in the form of Red Bull cans. And apparently it can get you a 5-Star stay in a penthouse smack bang in the middle of Melbourne, flights for three people from Melbourne to Sydney and an indoor skydiving experience.

‘The Three Monkeys’ travelled from Sydney to Cairns in five days, alongside 19 other teams nationally as part of the ‘Red Bull Can You Make It’ competition. Cash, card and mobile phones were banned, leaving only the power of persuasion and charisma to get them clocking up the kilometres (and well… frankly just eating for a start).

“I’d recommend it 100%. It gets you out of your comfort zone and challenges you and the experience is incredible,” Laura says.

“We were staying in penthouses, going indoor skydiving… things that we would normally pay a lot of money for, we were doing for free basically.”

It definitely wasn’t all glamour for the trio though, like driving a van for 26 hours straight (which cost them half a slab of red bull). They unfortunately crashed the van and had to get cable ties to hold the doors in.

All originally from Wagga Wagga, Lachlan and Mia have known each other since kindergarten and Lachlan met Laura when they both did exchange in Brazil in 2010. They have since been on numerous overseas trips together, and are never short of a story, including a Vegas wedding between Locky and Laura, and a trip to Thailand where Laura broke her pelvis in a scooter accident.

But did they ever have doubts about whether they could make it this time?

“A bunch of times, so many times. The day in Melbourne when we couldn’t get flights, we thought why would we even try to do this. This is the most ridiculous idea,” Lachlan says.

He also said the team developed a really thick skin after facing rejection all day while trying to barter for food, accommodation, fuel and travel.

“Half the people thought we were just begging for money and the other half of the people would be crazy enthusiastic and would go above and beyond to try and help us,” Lachlan says.

A random family invited them into their home, helped by researching their long journey ahead after their GPS failed, fed them, filled their van up with fuel and sent them on the road with snacks. Faith in humanity restored.

The team received one slab of Red Bull cans for reaching a checkpoint and another for completing a challenge, which included wake-boarding, bungee jumping and a half-hour hip-hop class.

There is more monkey business planned for the trio in the new year.

In January they are signing up for the Rickshaw Run, a two week journey from one side of India to the other with no rules or route, just the compulsory rickshaw rides. Laura says they plan to raise money for an orphanage in India run by a friend.

The Red Bull Can You Make It competition was won by the ACT team ‘the three pigs’. They were awarded an all-expenses paid Contiki tour of South East Asia and a Sony camera. The Three Monkeys clearly dominated social media though, with each post on the official Red Bull competition page generating up to 300 likes.

To read more about the 20 teams involved in the competition, head to the Red Bull Can You Make It Facebook page.