Meet the Papergirl bringing cycling and art together 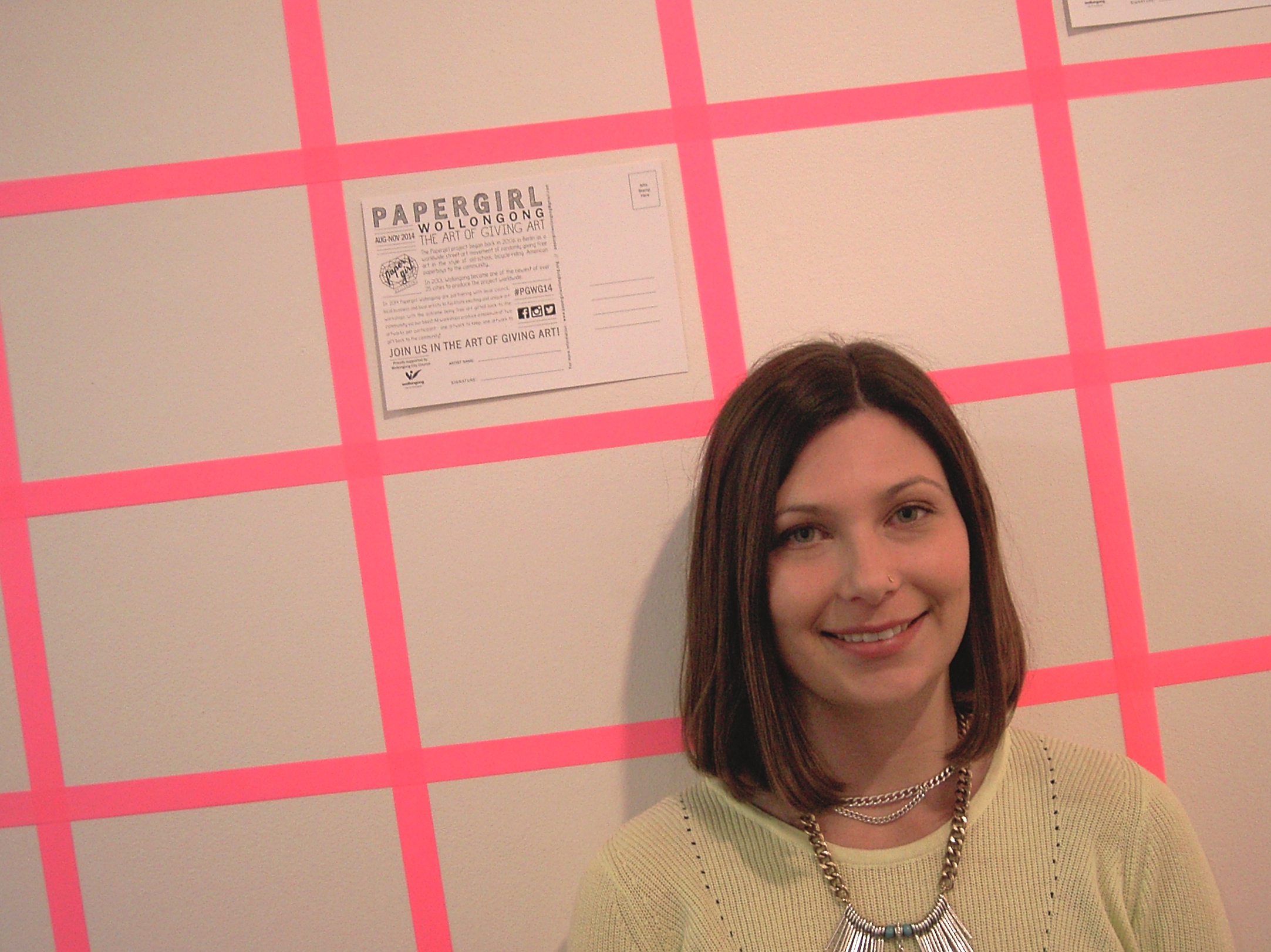 The team behind Papergirl Wollongong is getting ready to launch into a new year of collecting art to exhibit and delivering it by bike to the public. Coordinator Emily Gunthorpe took a break from preparing for the busy schedule of opening week to talk about the international movement.

“We’ve all got a creative mind, we just use it in a different way,” Emily explains, sitting calmly on a lounge in the Project Contemporary Artspace on Keira St. Around her lie open boxes of pamphlets and supplies for the workshops that will take place over the next few days, culminating in a party on Friday night (August 9) to celebrate the official launch. Working as an intern for the project last year, she considered herself to be “an all-rounder”, assisting in event preparation, promotion, workshop facilitation and the all-important bike ride around Wollongong to deliver art. Now a Project Coordinator, she’s passionate about organising events and developing community engagement.

“We have an open door policy,” she says firmly. “We’re very inclusive, and we want to encourage people to express themselves through art.”

Originally from Figtree, Emily graduated from high school in 2008 and decided to study Textile Design at COFA in Sydney, where she graduated with a Bachelor of Design. Believing at the time that there weren’t any opportunities in the creative field in Wollongong, she has been pleased to see a positive shift in the regions attitude to creativity in the past few years.

“Since completing my degree last year, and then focusing more on my art practice here, you can see it across the city – not just in art, it’s all the small bars and restaurants,” Emily says. “There’s been a cultural change, which in turns means a change in attitude to art. I think the street art from the Wonderwalls Festival is one of the best things that’s happened to Wollongong.”

The city’s response to the creative community was evident to the Papergirl team when delivering art last year.

“There were a handful of people that probably had the wrong idea about us approaching them, not understanding that we were trying to give them donated art,” Emily remembers. “But for the people who hadn’t heard about the project until that moment of being gifted art, the look of surprise on their face, and their reaction when they opened the package and realised someone had made something so unique, was a great thing to see. We’re obviously hoping there’ll be an even greater reception now that people are more aware of what we’re doing.”

Through her textile practice, Emily has been able to get involved in community engagement and use her creative skills to bring the community together, a passion that has worked well with her role as a Papergirl coordinator.

“I’m really driven to bring people from all across the wider community to the project, so minority groups, disabled groups and multicultural groups,” she says. “We’re in the process of booking workshops tailored to different groups across the community. I believe that they’re not always included, and in art it might not be, or sometimes simply isn’t, easily accessible.”

As the aim of Papergirl is to bring art to the community, Emily is a firm believer that the team should make an effort to approach people rather than expect people to take the first step.

“[Papergirl] definitely offers broader avenues to get your art displayed. We’re running satellite exhibitions in November, which run like pop-up exhibitions in local cafes and businesses, and we’ll also be curating an exhibition at Now You See Me Gallery, so anyone who donates art will get the opportunity to have artwork displayed in a professional curated exhibition. We encourage everyone to put their name and website on those pieces in order to make the most of the opportunity and get their name out there.”

Last year most workshops were facilitated by the Papergirl team, while this year there has been an effort to bring in more artists to present workshops. This offers an opportunity to showcase their art and utilise a promotional avenue as they give back to the community. The project also hopes to encourage those who don’t believe they have any artistic talents to take part in the movement.

“When we ran a workshop at Wollongong Youth Centre for disadvantaged youth, they had their hesitations at the beginning of the workshop,” Emily says. “They hadn’t ever really expressed themselves creatively before and we gave them the avenue to do that. By the end of the day you could see the joy in their face; they knew that their artwork was going to be exhibited and contributing to the cultural landscape of Wollongong. I think it was a really positive experience for the participants and from that process I’ve begun planning other similar workshops.”

While talented, Emily is all too aware of her own creative weaknesses.

“I’m really looking forward to the ‘Haiku How To’ workshop on Friday (August 9), but I should mention, and this will help the cause with any amateur artists, I cannot write,” she says, laughing. “I was terrible at creative writing during school, but I want to give it a go again, I want to make a poem and be proud of what I make. It will definitely be a new experience for me but with Papergirl, that’s half the fun.”

Everyone is encouraged to attend Papergirl events, particularly the launch party, regardless of whether they consider themselves an artist.

“The launch is going to be a pretty great party. There’ll be food, drinks, music, we’ll have a DJ as well as live demonstrations and performances,” Emily says. “It’s just a good time to meet other people, the artists who are contributing and really get the community engaged.”

The submission deadline for Papergirl is October 1st. Work must be anything A3 size or smaller, and able to be rolled up like a newspaper.

Papergirl Wollongong is made possible this year through a Cultural Grant from Wollongong City Council’s Cultural Services. All members of the Papergirl team volunteer their time in order to bring art to the public. For more information visit www.papergirlwollongong.org